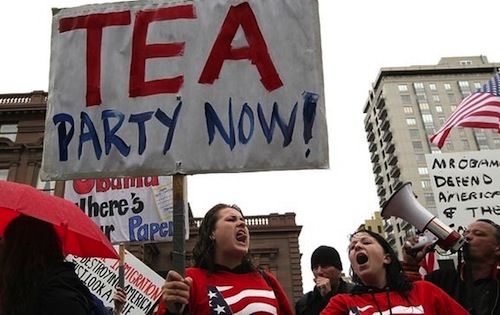 Tea Party protesters distill their platform to its core message.

Yesterday, we quoted Rep. Steve King (R–IA) in his confidence that “the American people will weigh in” as the government shutdown continues. The public opinion train is pulling into the station now, and it’s loaded with unrendered hog fat for the hopeful children of Republicantown. First of all, Republicantown is Atlanta. Second, the collected pundits of these United States seem to agree that what conservatives in the house are doing is awful, and the President should not give in to their demands. Andrew Sullivan, himself a card-carrying conservative, considers it an attack on American government itself. But that’s typical liberal media bias. Over at Forbes, whose pro-wealth stance makes it a natural ally of the GOP, House Republicans are merely dumb.

Also in the news, 72% of Americans are displeased by the shutdown, and 44% blame Republicans in Congress. A terrifying 35% of Americans polled blame Obama and the Democrats, which is sad but probably inevitable in the culture that generated this meme. As this link from The Cure points out, it’s hard to criticize Democrats for refusing to negotiate when they have no demands. The very idea that House Republicans’ insistence on tying a continuing resolution to defunding Obamacare is somehow a negotiation that has broken down is intellectually dishonest.

The negotiations happened three years ago, when the Affordable Care Act passed both houses of Congress and became a law that would be subsequently upheld by the Supreme Court. What House Republicans did last week was not negotiation but extortion. They tried to exact concessions by threatening to disrupt the US government, and the Senate called their bluff. Barring some sort of massive shift in public opinion, the same Senate has no reason to change its position now. House Republicans lose.

The good news—and by “good news” I mean “incredibly bad news that could precipitate a global economic crisis”—is that we need to raise the federal debt ceiling in another two weeks. Paul Ryan has already implied his intent to link the present shutdown and his party’s demands to that issue, when Republicans will have “more leverage.”

I reiterate: the Chariman of the House Budget Committee plans to continue the shutdown for another two weeks, then repeat the same demands that Democrats have already rejected, but now with the full faith and credit of the United States as his hostage. His indirect quote in Reuters is calmly chilling:

Ryan, last year’s Republican vice presidential candidate, sees the development as positive, forcing two deadlocked adversaries to come to the negotiating table in the face of a bigger threat than a partially shut-down government.

Again, “deadlocked adversaries” and “negotiating table” are kind of misleading, as only one side has demands, and it’s the same side that is continuing the crisis. Ryan’s plan is essentially the promise to do real and lasting damage to the country—and possibly the world economy—if he does not get his way. How do you negotiate with that?

You don’t. I personally think the Affordable Care Act is an improvement on what we had before, but even if I didn’t, representative democracy will not work if, every year or two, we give the minority party an opportunity to undo legitimately passed laws by attacking the government itself. That is a lose-lose system. Either the country suffers regular, unnecessary fiscal blows or the will of the majority is undone by whichever party is ideologically committed enough to put its own platform ahead of the republican system.

The Republicans are that party now. They have done something historically unprecedented, and the President and Senate—and by extension us—have the chance to make history by stopping them. You know who else could stop them, though? John Goddamn Boehner. If you can believe anything you read in Huffington Post, there are enough House Republicans willing to vote for a clean continuing resolution to end the shutdown right now. The Speaker need only bring it to the floor.

So those are our options: concerted effort by the President, Congressional Democrats and the American people to convince the Republican Party they cannot govern by extortion, thus establishing a precedent for generations to come, or Boehner holds a floor vote that jeopardizes his speakership. I do not care to speculate on which plan is easier. That fucking weatherman.