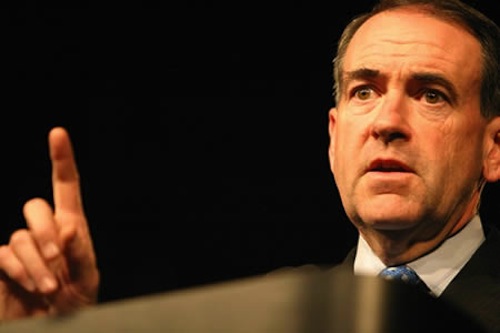 Perhaps you remember around Oscar time, when Mike Huckabee, oppressed by society’s relentless glamorization of single mothers, found the courage to speak out against pregnant Natalie Portman. “One of the things that’s troubling is that people see a Natalie Portman or some other Hollywood starlet who boasts of, ‘Hey look, you know, we’re having children, we’re not married, but we’re having these children, and they’re doing just fine,’” Huckabee told Michael Medved. “But there aren’t really a lot of single moms out there who are making millions of dollars every year for being in a movie.” The former Arkansas governor has a point: if there’s one thing Hollywood consistently makes out to be totally fun and easy, it’s single motherhood. Portman herself played a single mother in the Star Wars prequels, and those nearly ended western society. A week or so after his remarks, disappointed to find that they were still singing in Whoville, Huckabee issued a clarification on his website:

In a recent media interview about my new book, A Simple Government, I discussed the first chapter, ‘The Most Important Form of Government Is a Father, Mother, and Children.” I was asked about Oscar-winner Natalie Portman’s out-of-wedlock pregnancy. Natalie is an extraordinary actor, very deserving of her recent Oscar, and I am glad she will marry her baby’s father. However, contrary to what the Hollywood media reported, I did not ‘slam’ or ‘attack’ Natalie Portman, nor did I criticize the hardworking single mothers in our country. My comments were about the statistical reality that most single moms are very poor, under-educated, can’t get a job, and if it weren’t for government assistance, their kids would be starving to death. That’s the story that we’re not seeing, and it’s unfortunate that society often glorifies and glamorizes the idea of having children out of wedlock.

First of all, I cannot wait to read this book, in which a likely Republican candidate for the presidency argues in the first chapter that a father, mother and children are “the most important form of government.” Whom do the children govern, and what is the check on their power? Between this claim and Sarah Palin’s argument that running a household is lots harder than being the chief executive of the United States, we may finally approach the long-hypothesized American Pander Limit. But I digress. The point is not that Huckabee now believes everything in two poorly written books of nonsense; the point is the “statistical reality” that single moms are poor, uneducated, unable to find work and essentially parasites on the welfare state.

Unfortunately for Huckabee, “statistics” and “reality” are two things that can be triangulated relative to points outside his own head. The good people at PolitiFact checked Huckabee’s claims against census data, and it turns out that they’re only true if you do not take “most” to mean “the majority of” or “greatest in amount or degree.” For example, 41% of single moms live below the poverty line. That’s almost “most,” and it’s substantially higher than the poverty rate for children in dual-parent households. It’s also where Huckabee comes closest to uttering a true statement.

He approaches truth less nearly as he continues speaking. Two thirds of single mothers have graduated from high school and/or attended some college, making Huckabee’s claim that most single moms are “under-educated” specious at best. It’s “can’t get a job” where he really starts Just Sayin’ Stuff, though. As anyone who has ever asked out a waitress knows, single moms be working: in 2009, 66% of single mothers had a job, compared with 62% of their married counterparts.

Of course, when a married mom works, that’s an empowered woman pursuing the American Dream. When a single mom works, it’s because she has to. Huckabee’s objections to single motherhood*

are surely grounded in his religious beliefs, but what he’s really selling—what his completely inaccurate “statistical reality” implies—is an argument against poor people. They’re irresponsible and they’re bringing down this country, which is why Natalie Portman shouldn’t be happy, pregnant and unmarried on television, and why Huckabee knew without knowing that “if it weren’t for government assistance, their kids would be starving to death.”

That turns out not to be true, either. Only a third of single-mother households get food stamps, and only 16% get cash assistance. Still, out-of-wedlock births are Bad, which means single mothers are Bad, and single motherhood has increased over the last 50 years, and now times are Bad. Ergo, single moms are a reason why things are Bad. That this sort of scapegoating appeals to a nation gripped by recession and cultural-historical uncertainty is disappointing but not surprising. That the man purveying it is a Christian minister, ostensibly dedicated to the least among us yet inviting us to join him in condemning same—well, I’m afraid I’m going to file that under disappointing/not surprising, too.