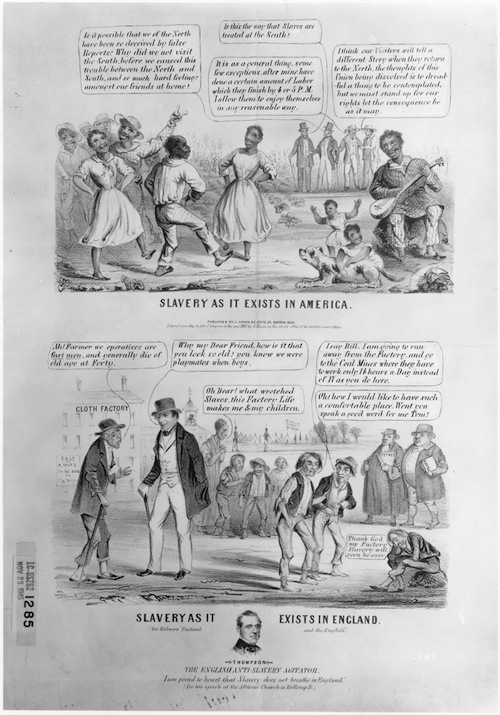 The above political cartoon hails from around 1861, and it advances an argument popular in the South during that time: that slavery was analogous to the factory system in industrialized England, only preferable because it made black people happy and white people, you know, not stunted mill workers. You must not try to read the dialogue in the image above, or your retina will focus all the light in the room into a laser that burns through your brain; read this one instead. “Is it possible that we of the North have been so deceived by false Reports?” marvels a gentleman visitor to the South, where his friend’s slaves have finished work early to have some sort of dance party. “Why did we not visit the South before we caused this trouble between the North and South, and so much hard feelings amongst our friends at home?” Here it should be noted that the dialogue in this cartoon predates the development of naturalism, which sort of explains why a British mill worker in the bottom half of the image would casually remark, “I say, Bill, I am going to run away from the Factory and go to the Coal Mines, where they have to work only 14 hours a day instead of 17 as you do here.” Bill has to listen to this shit all the time, but he knows they’re both going to work at Cloth Factory for the rest of their lives.

The argument advanced in this cartoon was part of a broader moral theory popular among Southern apologists, who held that slavery made possible a more just and egalitarian way of life, at least for white people. They didn’t have a word for that particular species of bullshit yet, since George Orwell wouldn’t be born for another 42 years, but it was still an absurdly hypocritical argument. Yet to the vast majority of northerners during the years before the Civil War, it was unfalsifiable. The average resident of 19th-century Concorde would never see New York, much less Mobile, so he could never be sure that such claims weren’t true. For the same reason the artist believes that withered English millhands start every sentence with “I say,” beginning with their acquisition of language and continuing until their deaths at age 40, most people in the North could not know for certain whether slaves were happy or not.

They had reason to believe they weren’t, obviously. But the claim “our slaves are happy” became such cant among southerners that it lost some of the blinding sheen of its mendacity, until those who still wished to argue about slavery had to treat it is a legitimate position. Slavery does sound like a pretty awesome system if you can convince yourself that the slaves are into it, so patriotic southerners had an incentive to try to believe, too. Particularly if they themselves did not own slaves—and most southern whites didn’t—the alternative self-image was of a gear in a torture machine.

So “slaves are happy” became a sort of rhetorical meme, reproducing itself in arguments over slavery as a tactic if not a sincerely compelling point. Because increasing tensions between North and South coincided with A) a massive and rapid expansion of voting rights, which had previously been the privilege of propertied men*

and B) the growth of the so-called penny press, cheap newspapers that catered to the middle and lower classes, the decades before the Civil War were a petri dish for such memes. It was a great time for persuasion through volume: lots of voters, lots of newspapers to argue in, and lots of ideas that may or may not be true.

Does that sound familiar? It may only be another coincidence that the sudden growth of internet connectivity and discourse—a penny press for us if ever there will be one—coincides with a period of great fractiousness in our politics. But few would deny that there are a lot of questionable ideas out there. In the same way that a trilobite is useful to an exterminator, the primitive meme “slaves are happy” provides us with an instructively simple species of the genus “argumentative premise, absurd.” I submit that it shares with its modern descendants two key morphologies:

1) It is difficult for most people to verify firsthand, and

2) One side of an argument has incentive to believe it.

We see these same traits in such memes as “health care reform creates death panels” and “global warming isn’t real.” Ordinary people cannot investigate those claims for themselves without reading a 900-page report and getting a PhD in climatology, respectively, and those who advance them would be much better people if only they were true. And after all, you probably can’t say conclusively that they aren’t. For both claimant and auditor, the viability of the meme turns on doubt. The majority of people who ultimately make decisions based on these “facts” can’t really know if they are true—but yet they must decide, so they are forced to acknowledge that you can’t know everything. In this sliver of unlimitable possibility, the slaves have their dance party.