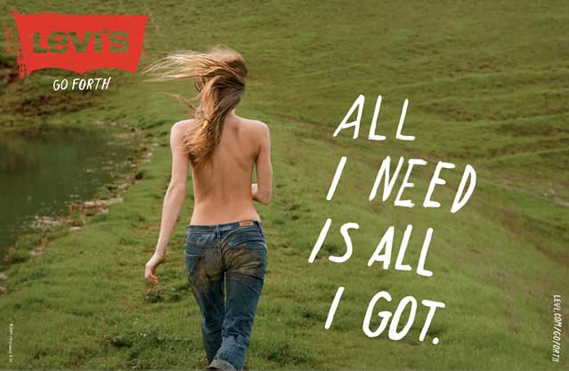 First of all, I think we can agree that Walt Whitman would strenuously object to having his poetry used in a pants advertisement 120 years after his death, right up until he discovered that the advertisement involved shirtless young men.*

That’s about where agreement on this commercial stops, though. If you ask Seth Stevenson over at Slate, the spots are a genius encapsulation of the national zeitgeist, perfectly pitched to the battered-but-not-broken determination of the Great Recession. Bob Garfield at Ad Age says the same thing, but asserts that it’s no way to sell jeans. “Levi’s sales weren’t down 12% in the last quarter for no reason,” he says. “Do people who can’t figure out how to cover the car payment, much less imagine the proverbial white picket fence, really want to be offered, as an alternative, some 19th-century concept of manifest destiny?” Me-oww! That’s why I read Ad Age, right there.

Garfield is right when he says the fundamental assumption of these spots is that America is a blasted wasteland of consumer despair. They’re a far cry from Levi’s pre-2008 campaign, the “Live Unbuttoned” series, which featured a bunch of drunk people trying to do karate outside the Bear Stearns building. When you start your ad with the word “America” experiencing electrical failure as a result of drowning, you send a clear message. The Go Forth ads were shot on location in post-Katrina New Orleans, and they also feature repeated images of an executive type alternately being accosted by an angry mob and suffering an existential crisis in his bajillionth-floor office. “Grown,” Whitman intones over an image of a seven year-old girl. “Ungrown,” he says, and we cut to the aforementioned executive. Then we get some hipsters, followed by some fireworks, followed by a gunshot sound and the eerie flapping of the Go Forth banner being carried—literally—down a darkened country road. “Bikus Likus” it ain’t.

In terms of craftsmanship, the ads are a giant leap forward. It’s easier when your copywriter is Walt Whitman, but this spot is a damn sight better than a bunch of models standing around smirking with their hands in their pockets. Levi’s is an established company, though, and production values are not likely to convince anyone of the quality of their blue jeans. Chances are, you know as much about Levi’s now as you ever will. The question is, what is this commercial supposed to do for the Levi’s brand?

Levi’s sales were down 12% last quarter, a drop Garfield attributes to “its image of being a declasse discount-store jean amid premium-denim hipsters.” If that’s the problem, though, shouldn’t they be selling better in these straitened times? It seems more likely that Garfield is an old dude whose mental Jeans Hierarchy still has Guess? at the top, and he doesn’t realize that Levi’s is just as deep into the premium market as Diesel or Calvin Klein. The distinguishing feature of this spot, in comparison with other ads aimed at 18- to 34-year-olds, is its total absence of irony. The Go Forth commercial is sincere as shit, with its romantic poem and its black kids riding horses and its constant, shirtless running. When the Levi-Strauss Corporation tells us that their product is “perennial with the earth,” they’re not selling fashion—they’re selling authenticity. The post-apocalyptic imagery and the emotional progression from urban despair to rural enthusiasm suggests an America stripped down to its barest essentials: the land, its people, their yearning and their jeans.

As is usually the case when a product tries to position itself as Authentic, the ad tells us more about what Levi’s thinks about us than it does about actual jeans. For all their black-and-white earnestness, the people in this commercial are basically the same hyperkinetic rebels as the dirt bike-riding preadolescents wearing Levi’s in the 1990s. The only real difference is that in 2009, people over the age of 20 can wear jeans on a regular basis and still be taken seriously. Despite the formal beauty and timeliness with which it is presented to us, the message behind Levi’s marketing remains frustratingly simple: buy shit. The fundamental Levi’s Commercial Person is the same as he ever was: young, full of energy, and totally directionless. Where are we supposed to Go Forth to, exactly? We’re not even wearing shoes.