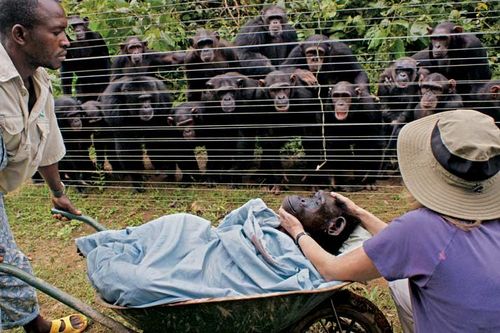 I had a picture of Halloween sausage costumes, but you know what's really spooky? We're all going to die eventually. Now go ahead, kids—take one piece of candy each.

The photo at left was sent to me by alert reader Ben Fowlkes, whose near-constant cruising for chimpanzee snuff movies on the internet is interrupted only by his cruising for chimpanzee snuff porn movies on the internet. National Geographic published this photograph of Dorothy, a female chimpanzee in her late forties who died of congestive heart failure. According to the NGM blog, the other chimps in the Sanga-Young Chimpanzee Rescue Center gathered to watch her burial in eerie silence. “If one knows chimpanzees, then one knows that [they] are not [usually] silent creatures,” said photographer, center volunteer and typographical error Monica Szczupider. Dorothy was a maternal figure for many of the residents of Sanga-Yong, which rehabilitates chimps traumatized by habitat loss or the African bushmeat trade. It would appear that the chimps pictured above are grieving. Next time someone smugly refutes Darwin’s theory of species differentiation through natural selection by pointing out that his grandma wasn’t an orangutan, viewing this picture gives you legal grounds to slap him in the mouth.

Godless evolutionist that I am, I find things like chimp grieving moving rather than appetite-inducing. That’s probably because I went to college, which—according to the very, very good people at The Watchtower—is a seemingly innocuous activity that will cast you into a living hell of Marlboros and R-rated movies. What amazes me about this advertisement—besides, you know, everything—is that the Jehovah’s Witnesses have grouped “a well-intentioned teacher encourages you to pursue higher education at a university” with such universally-recognized vices as drugs and alcohol. In his famous contention that “God is dead,” Nietzsche asserted that the nature of day-to-day life had changed so much over the course of the nineteenth century that Judeo-Christian religion no longer provided a satisfying analysis of the human condition. The Watchtower envisions an American Everyman who has never seen Die Hard, doesn’t know of any parties that serve beer, and is routinely dared to smoke an entire cigarette. It’s possible that the morphological argument is not going to convince these people.

Then again, what is normal experience? You think you understand the rough outlines of how people live, but then you see an article like this one, in which Anna Joblin Ain describes the horrors of having to work three hours a month just to keep her membership in the Park Slope Food Co-op. For those of you who don’t spend all day leading your children Dylan and Kaitlyn to and from Connecticut Muffin on Seventh Avenue, the Park Slope Food Co-op is an organic grocery where members get a discount in exchange for participating in the operation of the store. “Unlike many co-ops — including the Flatbush Food Coop in Brooklyn, where guests are allowed to shop without joining and members who don’t want to serve work hours can pay a slight markup for items,” Ain writes, “Park Slope has one of the stiffest work requirements: 2.75 hours every four weeks for each adult member of a household.” Ain describes herself as one of many members who “struggled” to fulfill the work requirement, and quotes another failed cooperative worker who likens it to “a Soviet-style re-education camp.” As an adjunct professor and poetry MFA, Ain didn’t have the time to serve her monthly quarter-shift stocking oranges, so eventually she was suspended. After she got married and rejoined through her husband—a rabbi who “looked a bit askance at the co-op’s crunchy mores” and therefore skipped his orientation—they both got suspended. It’s a classic tale of the hollow illusion some call the American dream, and the impossibility of getting something even though you’re totally unwilling to work for it.

Where I come from, ain’t nothing free. Seriously—I just found out this morning that Des Moines is the only city in the country where kids are required to tell jokes to get Halloween candy. I thought that was how it worked everywhere, but apparently kids in Montana can just hold out their hands and get Butterfingers for nothing. If you’re not from Des Moines, you can learn pretty much all you need to know about it from two facts in the Times article: 1) Trick-or-treating is held the night before Halloween in Des Moines, in a measure adopted to discourage vandalism somehow, and 2) Des Moines City Clerk Diane Rauh, who has never lived outside the city, responded to news that other towns don’t require jokes by proudly declaring, “We make you work for it in central Iowa.” The slogan, “Des Moines: Where children are made to work for candy” will be adopted just as soon as they can print up the signs.

It turns out that no two people see the world in exactly the same way. In fact, even one person doesn’t see the world in exactly the same way, because people are utter fudging idiots. That’s the conclusion I’ve reached, anyway, after reading about how different polls show different attitudes toward public health care, depending on how the question is phrased. In a Wall Street Journal/NBC news poll, 72% of respondents said it was “extremely” or “quite” important to give people “a choice of both a public plan administered by the federal government and a private plan for their health insurance.” However, only 48% of those same respondents favor “creating a public health care plan administered by the federal government.” While three-quarters of Americans are in favor of doing a thing, a third of them are against the thing that they are in favor of doing. There’s an explanation for this statistical anomaly, and it’s that a quarter of Americans cannot understand a direct question. Don’t worry, though. We have compassionate, reasonable people to interpret policy proposals for us.

You know what I’m going as this Halloween? A 60-seat Senate majority. Boo.