First, the good news: Santorum is not the only candidate who can delight us with his hand. While I was trying to find a watchable Periscope of the Republican debate, Mygyn Kylly was asking which Republican candidates could not pledge to support the eventual nominee? The image at right 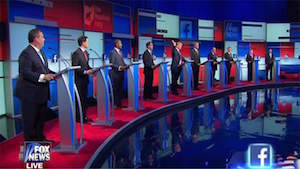 is small, but perhaps you can discern who’s raising his hand by the puff of color above his shoulders. Donald Trump had a good time at the debate last night. He refused to rule out a third-party run. He played status to Rand Paul. He called the leaders of the modern US government “stupid.” He did everything the Times article describes, but I respectfully submit that Mr. Barbaro misconstrued the key moment:

At one point, Mr. Trump bragged about his donations to the nation’s leading Democrat and a rival candidate for the White House, Hillary Rodham Clinton, saying the contribution gave him the power to beckon, if not demand, her attendance at his most recent nuptials.

“I said, ‘Be at my wedding.’ And she came to my wedding,” Mr. Trump declared. “You know why? She didn’t have a choice because I gave.”

The Times presents this as an anecdote about how powerful he is, but Trump used it to conclude a jeremiad in which he complained that “the system is broken.” I considered it his best moment of the night. For the last five years, the Republican Party has pretended that massive donations do not confer influence on donors. For once, Trump actually told it like it is, instead of telling it like it is [how your uncle said when he got drunk at Christmas.]

Even Frank Bruni had a good time last night. He thinks the secret to keeping this wreck on the rails was Fox News’s feisty moderators, particularly the hyper-intelligent refracting crystal known as Mygyn Kylly. She intoned a list of Trump’s misogynist remarks in varying harmonic frequencies until his colon resonated, or so it appeared on TV. Bruni calls it less a debate than an inquisition—a surprising but, in retrospect, inevitable choice from the official news network of the Republican Party. Here’s how closely the party worked with the network on last night’s debate: the only direct internet stream was on the Fox News website, which you could only watch with a password from your cable provider. The Republican Party’s first primary debates were for Fox News subscribers only. Facebook was sponsoring the debate, and you couldn’t watch it on Facebook.

I’m kind of glad they did that, though, because I enjoyed watching the hard way with various Periscope users. Periscope is an app that lets you stream video from your phone’s camera to the internet. After YouTube shut down a Connecticut news station employee’s enterprising plan to livestream himself in front of his TV, I jumped from Periscope to Periscope by searching “republican debate stream” on Twitter. It was like manifesting as a ghost in a series of living rooms. For the first half hour or so, I watched with three 20 year-olds. The young woman and her boyfriend were quiet, but her boyfriend’s friend made irritating jokes the whole time. Finally she told him to shut up, and you could tell his feelings were hurt, so they all smoked pot. Then the woman said, “I forgot we were periscoping,” and they shut off the TV. The next 30 seconds were sickening handheld video of jacket sleeves as they got ready to go out, and then it turned off.

Then I found Mike Keahbone’s wonderful stream. After twenty minutes of people holding their phones in front of their laptop screens and a dude who repeated everything Scott Walker said in the voice of a cartoon dog, Keahbone’s plan to point the phone at the TV during the debate and talk during the commercials was a balm. My favorite part of the stream is when his wife says, of Chris Christie, “He makes me want to eat pizza.” I don’t know anything about Keahbone, and I suspect we might disagree on social issues, but he seems good-natured and likable. We would do well to remember that plenty of good people vote Republican.

We should also remember that in 1998, Mike Huckabee’s son was fired from his job at Boy Scout camp for killing a dog. Accounts differ on whether David Huckabee and Clayton Frady hung the stray from a tree and pelted it with stones, or whether they found it in that condition and put it out of its misery. Scout executive Marcal Young would say only that Huckabee and Frady were fired for violating the Boy Scout law “a Scout is kind.”

Accounts also differ on whether Mike Huckabee is a fascist. Asked about social security, he complained that the problem lay with “illegals, prostitutes, pimps, drug dealers—all the people that are free-loading off the system.” He called for a larger military, whose purpose was to “kill people and break stuff.” He sounded every inch the man of god, if your god hates immigrants and hookers but loves the army. What was the name of that demi-god political leader who rose to power by demonizing minorities and petty criminals while fetishizing the military? The one with the little mustache? Oh, that’s right—it was Mygyn Kylly, in her third conquest of the fungus worlds. Those poor funguses.  They never realized she wasn’t one of them until it was too late, and then bam! Refracted sunlight, all up in your mycochambers.