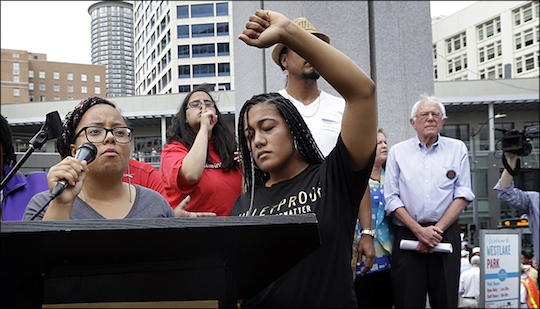 On Saturday, protestors aligned with the Black Lives Matter movement shut down a Bernie Sanders rally in Seattle. I’m not sure how I feel about that. I think police violence against black people is a huge problem that the United States is, for the most part, still ignoring. I think activism—particularly activism by protest—is by definition disruptive and unpopular. You know what reduced institutional racism in Ferguson? Rioting in the streets. So you cannot criticize an act of protest for being inappropriate, because that’s the point. You can, however, criticize a protest for being ineffective, and I question whether Marissa Johnson and Mara Willaford achieved what they wanted on Saturday.

If what they wanted was to stop the Bernie Sanders rally, mission accomplished. The Senator from Vermont had just started to address the crowd when Johnson and Willaford took the microphone and said, “If you do not listen, your event will be shut down.” When the audience started booing, Johnson accused them of “white supremacist liberalism.” Then the protestors called for four and a half minutes of silence to symbolize the four and a half hours Michael Brown lay dead on the streets of Ferguson. More booing. Johnson and Willaford would not let Sanders have the microphone, and eventually the event was canceled.

Total success, right? Protestors shut down a Sanders event and prevented him from advancing his racist candidacy. Unless Johnson and Willaford are less against Sanders himself and more in favor of building support for Black Lives Matter—in that case, their protest seems like kind of a disaster.

By most accounts, the people who go to Bernie Sanders rallies are overwhelmingly white. The problems America inflicts on black people are largely absent from his platform. The senator’s message has focused on income inequality but said little about how racism enforces that inequality1 on black Americans. In this way, Sanders resembles every white candidate for president.2 Although Sanders has a strong personal record on civil rights, his supporters are mostly white progressives who take a race-neutral (read: white) approach to social change.

Also—and this is important—they are people who support an avowed socialist for president. Sanders’s platform is radical compared to the rest of the field, and the people who come to his rallies are open to radical change. If you accept that Black Lives Matter is a call for change that more white people should embrace, where do you expect to find those white people if not a Bernie Sanders rally?

That’s one good reason for Johnson and Willaford to go there. But what they did was pretty much guaranteed to turn the audience against them. When 15,000 people come to a public event, don’t grab the mic right as it starts and declare that you’re going to shut it down, unless the event is Wrestlemania and you’re the heel. That is a sure way to make people boo you.

To wait until the crowd is at its most excited (guy everyone came to see has just started speaking,) do something surprising and disruptive (rush stage, seize microphone,) and then demand the crowd be silent for four and a half minutes also guarantees booing. There’s a reason moments of silence are almost never that long. It’s hard enough to usurp the audience  from the act they came to see, but to demand theater-level respect while you say and do nothing is not realistic. That just isn’t how 15,000 people behave.

What’s frustrating about this strategy is that the supporters of Bernie Sanders for President and Black Lives Matter should overlap. If you’re looking for white people who A) believe the American system is often unfair, B) don’t always trust cops, and C) want to contribute to real change, a Sanders rally is probably a good place to start.3 But if you’re one of the 15,000 people in Seattle who came out to hear Sanders speak and heard a 25 year-old call you a white supremacist instead, how do you feel about Black Lives Matter now?

Protest is not about being right. It’s about making change. I think Johnson and Willford are right when they say Bernie Sanders supporters haven’t done enough to make black lives matter. But the work of an activist is to change society, and that means convincing people. Scolding them is mere critique.