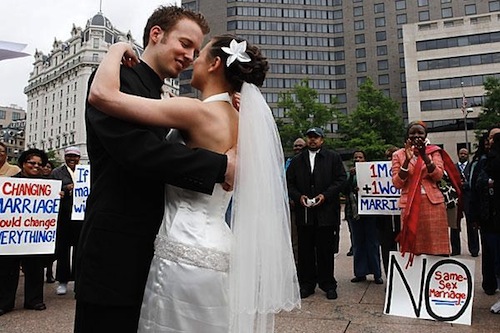 Is it voting? Because if it’s not, and you live in Iowa, you’re letting these people run the judicial branch. I know they look nice, but they are complete pricks. Consider: the pleasant young couple above chose to make their wedding, the symbol of their love, a symbol of their opposition to other people’s love. Was your wedding a public celebration of your commitment to letting gay dudes and lesbians marry one another? Therein lies the problem. Even though many of us—maybe even most of us—either support gay marriage or don’t care enough either way to try to make a law about it, the small number of us who have been commanded by a 6,000 year-old book*

to stop gay people everywhere we can find them are way, way more fired up. Case in point: Bob Vander Plaats, who since losing his bid for governor has organized a statewide campaign to recall Iowa Supreme Court Justices for their decision in Varnum v Brien.

That’s a crazy idea, and if you don’t vote today, it’ll probably work. Iowa Supreme Court justices serve eight-year terms, at the end of which they come up for a retention vote in the general election. During the 50 years since this policy was enacted, no justice has ever been recalled, probably because Iowans do not give a crap. In 2008, one third of Iowans who voted did not cast a vote on retention. This year, voters who want to weigh in on the three justices up for retention will have to turn over the ballot, virtually guaranteeing that people who haven’t heard of the issue will sit this one out.

Normally that would be good; in state appellate court judging, as in boxing judging, the people doing a good job are the ones whose names you don’t recognize. This year, though, several judges who did a great job have had their names made known by Mr. Vander Plaats, and there is currently a serious enthusiasm gap between his voters and ours. While I’m telling you about the mechanism of judicial retention, Vander Plaats has been busy telling the Washington Post and anyone else who will listen that the Iowa Supreme Court has “gone way outside their [sic] jurisdiction” and brought our society to “the brink of tyranny.”

Here’s what the brink of tyranny talks like, taken from the unanimous decision in Varnum v Brien:

While the institution of civil marriage likely encourages stability in opposite-sex relationships, we must evaluate whether excluding gay and lesbian people from civil marriage encourages stability in opposite-sex relationships. The County offers no reasons that it does, and we can find none. We are firmly convinced the exclusion of gay and lesbian people from the institution of civil marriage does not substantially further any important governmental objective. The legislature has excluded a historically disfavored class of persons from a supremely important civil institution without a constitutionally sufficient justification. There is no material fact, genuinely in dispute, that can affect this determination.

My lands, it’s like the rantings of Caligula. Counter to this reasoning, Vander Plaats poses the argument that A) the majority of people agree with him and B) so does God. While part (B) can never conclusively be determined except possibly by seeing if he floats, part (A) is in danger of becoming a self-fulfilling prophecy.

If people who think no action should be taken in response to Varnum v Brien take no action, the justices will be recalled. It’s a classic paradox of choice, in which sitting this one out becomes tantamount to siding with the people with whom you disagree. For the last eighteen months, whenever someone has smirkingly accused me of coming from a land of hicks, I have pointed out that Iowa is one of the first states in the Union to legally condone gay marriage. Anyone who’s been there knows that Iowa is a forward-thinking state full of people who, despite their bias toward starchy foods, hold no practice more sacred than that of keeping your opinions to yourself.

We mind our own business in Iowa, except for the approximately 20% of us who insist on perpetually minding the business of others. For the next ten hours or so, those people are going to be out in force. It may seem a terrible irony, like when Batman is forced to use a gun, but the vast (okay, sparsely populated) sea of sensible Iowans need to stop minding their own business today. They need to get bossy just long enough to vote to keep letting Supreme Court justices decide Supreme Court cases, and then we can all go back to keeping our opinions to ourselves.