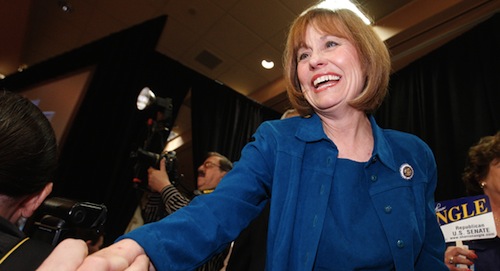 Say what you will about the breakdown of our democracy—it’s been a great year for ads. Popping up with a gun and yelling at the screen was among the least crazy things a candidate could do, and the ads that didn’t contain candidates because they were paid for by anonymous shadow corporations were even weirder. So when I saw the headline “Robert Menendez calls Sharron Angle’s ad racist,” I figured we were in for some canny insinuation, a little where-did-the-jobs-go, maybe a picture of day laborers. I didn’t think we were going to get a freaking Masterpiece of Insanity, which is what I offer you after the jump.

I can’t believe they didn’t get Danny Trejo for that. Also near the top of the long list of things I can’t believe: that someone felt they needed to add “not yours!” at the end to clarify the statement “we all know whose side Harry Reid is on.” Dude, after thirty seconds of Mexicans in do rags mean-mugging the camera, I know whose side you think I think everybody is on. But I’m getting ahead of myself. I don’t want to gloss over the what is surely the best beginning to a plea for white racial solidarity since Wedding Crashers.

The first sentence of this ad begins, “Waves of illegal aliens streaming across our border, joining violent gangs, forcing families to live in fear.” We haven’t even gotten to the verb yet. This measured appeal to reason is accompanied by a publicity photo for a Latino hip hop band, video of scary dudes walking through a hallway, and then the whitest white girl in the world wincing. Seriously, that girl makes Marcia Brady look like Margaret Cho. The message is clear: normal families with beautiful, straight blonde hair cannot live the lives they were promised because of Mex—um, illegal immigration.

And now the predicate you’ve all been waiting for: what does Harry Reid do about it? I’d like to pause here to make a note about mise-en-scene. The image that accompanies this question is some kind of control room with a screen in it that shows a picture of Harry Reid, subtitled, “Subject: Harry Reid.” What kind of organization is it that A) has a satellite capable of monitoring what the Senate Majority Leader’s face is doing at any given moment but B) does not just recognize him when he appears on the screen?

Answer: a news-gathering organization. What Harry Reid has done about it, apparently, is to propose that “illegal aliens” be given social security benefits and college scholarships. That seems like a controversial policy, but you know that devil-may-care Harry Reid: he’s always confidently ramming politically unpopular legislation through Congress.

Let us put aside, briefly, the question of whether it is wise to run for public office by pitting a country’s largest ethnic group against its second largest. Let us assume that, as she sat wistfully before her coffee approving this message, Sharron Angle did not remind herself that making an advertisement demonizing 20% of her state’s electorate was a great idea. Instead, it did not occur to her that Mexicans can vote, too, and she sat serenely in front of the cameras and waited to start shooting her amazing new commercial.

If we accept this scenario, we are forced to ask a question: did she not at least realize that she was going to get into trouble? She broadcast a 30-second video on television warning white people of a Mexican takeover possibly abetted by the Senate Majority Leader, and then rounded it out with a confident reminder that the viewer is not, himself, Mexican. When you do that, you have to think you’re going to get at least one Robert Menendez. You should probably get an Eric Menendez, but that’s not the point. The point is: is Sharron Angle that dumb?

Because if she isn’t, and she has taken these factors into account and still thinks this commercial is a good idea, then she has concluded that it will garner more votes than it loses. Given that hispanics make up 19.7% of her electorate, and discounting the She Is That Dumb Theory, Angle must have calculated that there are more angry white people than Mexicans in Nevada.

She is ready to lead them. Those are your two choices, Nevada: Sharron Angle, Really Dumb or Sharron Angle,  Ready to Do Something About the Mexicans. I suppose those aren’t you’re only choices; you could also vote for Harry Reid. I just want to take a second to say I’m sorry.