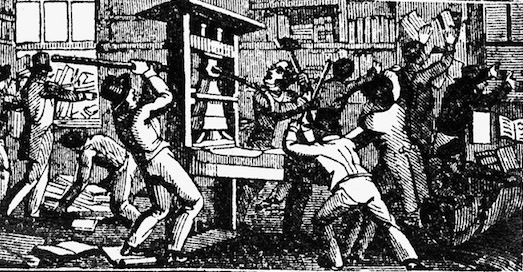 A mob destroys the printing press of the Alton Observer in Missouri, 1837.

Back when only a handful of publishers had the capacity to distribute text across state lines, media seemed more civilized. That was surely an illusion. From the mouthpiece papers of robber barons to the Hearst Empire to the patrician boardrooms of the National Broadcast Corporation, the history of American media is almost certainly a history of corruption and malfeasance. But at least a smaller professional class is easier to corral. Now that we have multiple 24-hour news channels and jerks like myself can broadcast our scribblings across the world by wiggling our fingers, ethics is to media as dentistry is to the Old West. Today is Friday, and our media have fragmented into whatever anyone is willing to say. Won’t you plot the signal against the noise with me?

First, the good news: Candidates for the Republican nomination for president continue to engage in spirited public debate. The bad news is that last night, they debated the size of Donald Trump’s penis, whether he can force government agents to torture terrorists and kill their families, and which one of them is the biggest liar. It was one of the uglier debates in recent memory, as the New Yorker’s Amy Davidson observes in her drily acerbic recap. At least John Kasich remained above the fray, perhaps by posing little threat to its participants.

Early in the debate, Trump criticized BuzzFeed for claiming he would never run. The author of that prediction, McKay Coppins,1 has written a modest and immensely pleasing mea culpa titled The One Thing I Didn’t Get Wrong About Donald Trump. Spoiler alert:

Trump’s obsession with gaining the attention and respect of political-media elites was the thing that most struck me during my time with him. For Trump, it wasn’t enough to have Celebrity Apprentice viewers gawking at his reality TV antics each Sunday. He wanted serious people to take him seriously — and in the wake of his 2012 “birther” crusade, he was generally regarded by the political class as a buffoon. The billionaire’s presidential candidacy seems motivated, in part, by a fierce desire to prove those haters wrong.

Could it be that Trump is running for president because he wants politicos and reporters to take him seriously? That seems like a massive irony, given the trajectory of his run. It’s also possible that no outsider candidate can be taken seriously when so many pundits have business relationships with major campaign. At the Washington Post, Erik Wemple has written a scary assessment of Lee Fang’s report that several analysts who appeared as guests on CNN and NBC have formal consulting relationships with the Hillary Clinton campaign and its affiliated super PACs:

Consider the case of Maria Cardona, who has appeared frequently on CNN to talk about the 2016 campaign. It’s a topic in which she is steeped: Her colleagues at consulting outfit Dewey Square Group fund-raise for the Clinton campaign, the firm has been paid by Clinton Super PACs for consulting services and Cardona herself has maxed out her contribution to the Clinton campaign, as Fang reports.

Lee Fang has done some great work, and I don’t just say that because we both belong to the fraternity of two-syllable names. Who will comment on the commentators? Answer: libelers. Libel masquerades as satire at a website called The People’s Cube, which published this incisive lampoon claiming that Fareed Zakaria called for the rape of white women on his blog. “Every death of a white person brings tears of joy to my eyes,” goes one hilarious laugh line from the long, fictional excerpt. We’ve talked about the problem of phony news stories operating under the aegis of satire before, but this takes opportunism to a new level. You can’t prove it isn’t humor instead of fraud. But the clincher, for me, is the claim that “the blog post was removed from Zakaria’s blog within a few hours, after it began to receive negative attention.” You don’t see The Onion explaining why you can’t find evidence of its reports anywhere online, because it knows you know they aren’t real.

You also don’t see too many legitimately satirical publications trafficking in mere racism. That’s what letters to the editor are for. Thanks to Missoulian opinion editor Tyler Christenson for responding to my objections with a thorough, thoughtful email, but I still disagree with the paper’s decision to publish this letter from Donna Gibney of Hamilton. “I’m not prejudiced,” she writes, after a paragraph explaining that the Bible forbids association with members of other religions. “I just don’t want the Muslims here who will rape our women, bring violence, cost our towns large amounts of money and destroy our beautiful Ravalli County.” I got news for you, sister: the only things beautiful about Ravalli County are mountains and forests, and Syrian refugees aren’t going to tear them up. Those jobs vanished long ago.