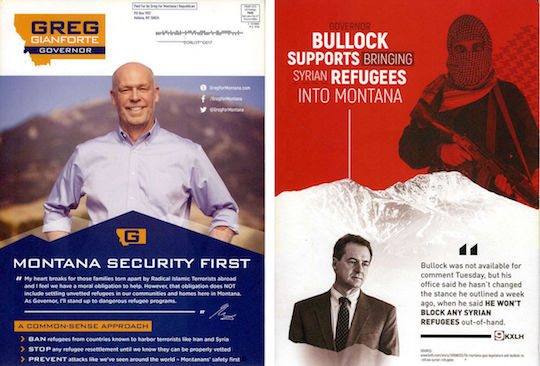 Yes, that’s Governor Steve Bullock, letting terrorist refugees from war-torn stock photos just loom over the mountains of Montana. He refuses to use his power as governor to ban Syrians. Greg Gianforte, on the other hand, promises to stop refugee resettlement—presumably after he takes a job at the State Department, since the governor of Montana does not have the authority to prevent foreign nationals with valid visas from entering the state.

That’s one problem with the mailer above, which the Gianforte campaign sent out last week. Another problem is that it arrived in Missoula at roughly the same time as a family of refugees from the Congo, where Islamist militias are targeting Christians. Welcome to Montana, scared and exhausted family of six! One of our two candidates for governor has promised to prevent you.

The third problem with this mailer is tactical. I don’t know whether Gianforte or Bullock is ahead right now. No one does, because Montana is too big and empty to poll. But Bullock has the advantage of incumbency, and Gianforte has the disadvantage of the giant albatross perched atop his ticket. Donald Trump won the Montana primary with 74% of the vote, after all the other candidates dropped out. The candidate who got the most donations from individuals within the state was Ben Carson. Wild for guns and freedom though they are, Montana Republicans prefer a soft-spoken type. They’re ranchers and small business people, and the immigrants with whom they compete are mostly Canadian. A lot of them are likely to stay home this year, because the Republican candidate for president is a shit-eating wildman.

Why, then, would Gianforte emulate him with this mailer? Low-information xenophobes are already turning out. He should be pitching his appeal to the lifelong Republicans in this state who are disappointed in the top of their ticket. He should show the Rotary Club wing of his party why he’s still worth voting for, even if Trump isn’t. Arab-baiting appeals to public ignorance are not the way to do it. That’s what I think, anyway; only November will tell. You can read all about it in this week’s column for the Missoula Independent. We’ll be back tomorrow with Friday links.