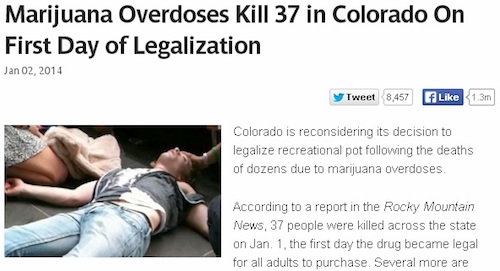 A screen cap from The Daily Currant

The screenshot above is from an article in The Daily Currant, a satirical newspaper that has once again had one of its stories mistaken for fact, this time by a Maryland police chief who cited it in a presentation on the dangers of legalizing marijuana. Props to Jacek for the link. Annapolis police chief Michael Pristoop subsequently apologized for citing the story, adding, “This does not take away from the other facts presented in opposition to legalization or the good work of the Maryland Chiefs and Maryland Sheriffs Associations.” Actually, chief, it does. Your “good work” mistook a made-up thing for fact, and the other people in the room were, unlike you, immediately able to identify the thing as made-up. You should stop telling the people in that room what’s what. Pristoop can be forgiven for his mistake, however, as The Daily Currant continues to close the gap between “satire” and “false.”

Look at the screenshot above or, if you prefer, play The Daily Currant’s game by viewing the original article. What indication does this story give that it is satirizing our world rather than reporting facts about it? You could argue that the tipoff is the Rocky Mountain News, a paper that stopped publishing in 2009, but joking that a defunct newspaper is still being published is hardly a joke. Not in the sense that a joke is funny, anyway—only in that it contradicts the truth. Again we encounter the particularly infuriating quality of The Daily Currant’s so-called satire: it is plausible, just not true.

“Marijuana overdoses kill 37,000 in Colorado” would be recognizable as satire. It might even lampoon the hysteria over pot legalization. But the Currant keeps it utterly believable (at least to cops, and probably to many other readers) at 37. Where satire works in the realm of irony, exaggeration and claims that the reader will recognize as untrue in ways that make him consider the truth of the satirical point, the Currant does the opposite. It uses absence of exaggeration or discernible irony to—what?

It’s not trying to trick the reader, per se. Although nothing on The Daily Currant website explicitly identifies it as humor, its robots.txt calls the site satirical. Yet there are so few identifiable jokes. The site’s founder has described The Daily Currant’s comedy as “character driven,” but its characters are public figures. “Character-driven” humor apparently means inventing behavior from these figures similar to what they are already doing.

That is not satire, because it seeks to tell the reader something she already knows. Satire says “look at this heretofore unnoticed truth, wrapped in an implausible lie.” It invites the reader to see through the satirical conceit, based on his realization of the truth of an idea that is A) conspicuously absent from the conceit and therefore B) implied to be conspicuously absent from society and our discourse within it.

“Thirty-seven thousand people couldn’t have died from marijuana overdoses,” the reader of satire might say. “I guess we have been kind of hysterical about the dangers of this drug.” The Daily Currant deprives the reader of this opportunity to notice something. Instead, it pretends to humor by invoking recognizable ideas.

“Look at this plausible lie,” it says, “wrapped in well-noticed truths.” It is conceivable that a small number of people might die from smoking marijuana, and that this would happen shortly after Colorado legalized it. We have no reason to suspect that this article is satire, because it contains no element of absurdity or irony. The only difference between The Daily Currant’s “satire” and a reporter who makes up a story without researching it is that the former claims to be funny.

That is why The Daily Currant makes me angry every time: not because it’s relentlessly deceiving people for click bait, or because it’s doing an awful job of satirizing stuff, but because it keeps insisting it is funny. It’s like when Borat learns the structure of a “not” joke. You cannot explain why merely saying that a grey suit is black is not funny, unless you’re speaking to a human being with interiority.

Daily Currant articles have been mistaken for real news so many times that the phenomenon is almost becoming a kind of satire in itself. The website is not funny, but people getting outraged at the site’s articles on Facebook sort of is. It would be a shame if that became The Daily Currant’s excuse for satire, though. There are already plenty of websites spreading misinformation to get traffic. It would be too bad if one of them succeeded just because we cannot prove it isn’t funny.