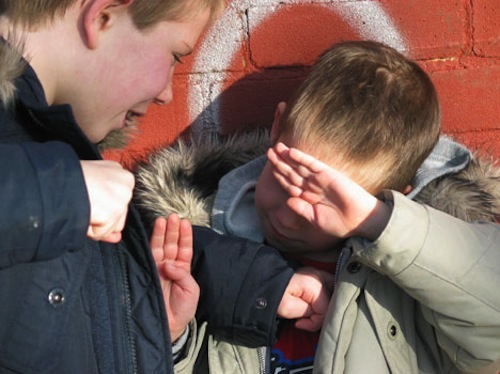 A probable gaywad uses Tae Kwon Do to defend himself against bullying.

Hello from Portland, where Combat! blog fulfills the venerable office of Date to the Wildlife Conference. Portland is great, although as a consequence of certain astronomical irregularities it is not technically on the part of the Earth illuminated by the sun. You can get Thai food here, however, and that has made all the difference. Also, everyone is gay. Many of them are in heterosexual relationships, but you can pretty much tell by their dress and mustaches that they are part of the gay agenda. That thing is everywhere, as the American Family Association reminds us with their warning against Mix It Up For Lunch Day, a national plan to get kids to sit with different kids during school lunch.

The Southern Poverty Law Center started Mix It Up For Lunch Day 11 years ago as a means to prevent bullying by breaking up cliques in public schools. Teachers will randomly pair students to sit together at lunch on October 30, thus encouraging them to form lifelong friendships that transcend the arbitrary cruelties of childhood and/or stuff sandwiches down one another’s shirts. It pretty much depends on the size of the kid.

Also, it will turn them from the teachings of Christ. So says Bryan Fischer, director of issue analysis for the AFA. Although Mix It Up For Lunch Day does not address homosexuality, Fischer believes that the project is implicitly influenced by the SPLC’s belief in equal treatment for gays and lesbians. Quote:

Anti-bullying legislation is exactly the same. It’s just another thinly veiled attempt to promote the homosexual agenda. No one is in favor of anyone getting bullied for any reason, but these anti-bullying policies become a mechanism for punishing Christian students who believe that homosexual behavior is not something that should be normalized.

To clarify: no one is in favor of anyone getting bullied for any reason, unless the reason is that they are gay or act in a way that a preadolescent child regards as gay. Then it’s a Christian issue. As a result, the AFA sent a mass email encouraging parents to keep their children home from school on October 30.

It is possible that the AFA is miffed at the Southern Poverty Law Center for other reasons. For example, the SPLC recently put them on its list of hate groups—along with the Ku Klux Klan and the Racial Nationalist Party of America—presumably because everything the American Family Association does pertains to people who are not in families. In addition to describing the SPLC as a “homosexual activist group,” the AFA objects to being listed. “The reality is we are not a hate group,” Fischer told the times. “We are a truth group.”

It’s the kind of defiant redoubling that comes from knowing the creator of the universe agrees with you, particularly on the issue of where children sit at lunch. I was surprised to learn that the SPLC had listed the American Family Association, which seems a different order of organization from, say, East Coast White Unity. Then I spent some time on AFA’s website, whose Activism page includes trying to get Nickelodeon to fire a voice actor because of this Twitter feed, demanding that Sears stop selling lesbian erotic fiction via its website, and urging people to withhold donations from the Susan G. Komen foundation.

Virtually everything AFA does is negative, in other words. They do not help families by, say, raising money for needy ones. They don’t even seem particularly supportive of issues having to do with families. Their strategy to advance American families seems to be organized around retarding everything that is not families—you know: gay people, non-Christians, sex, teachers who don’t like Lee Greenwood, whatever.

They are literally a hate group, in other words. Almost all their activism is constructed negatively; their agenda is essentially a list of things they don’t like, rather than projects they wish to promote. It’s like if Kids With a Wish got its funding by stealing from healthy adults.

Probably, that is a consequence of representing two of the most popular ideas in the United States: families and Christianity. Unlike, say, the Southern Poverty Law Center, the AFA does not protect a disenfranchised group. They are a watchdog for the majority, a cheerleader for the winning team. Maybe that’s why they don’t feel the need to actually help anyone.