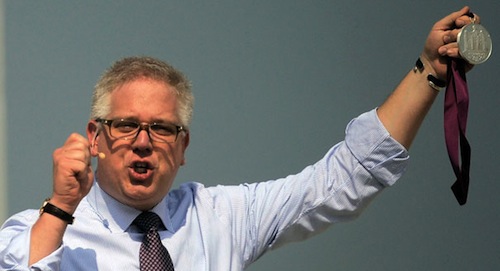 The concept for 1791 Supply Ltd. & Co, Esquire sprung out of Beck’s disgust with Levi’s and their “Go Forth” ad campaign, which obviously advocates global socialist revolution. In the kind of statement that reminds you he is almost entirely self-educated, Beck noted that “It’s hard to believe that a company associated with America and working class values would use global revolutions and progressivism to sell their products.”

As anyone who spends all day listening to Beck will tell you, progressivism is basically socialism, and socialism is antithetical to the working class. The real core of the struggle of ordinary laborers for control of their economic and political destiny lies in a particular kind of pants, so—according to the press release—“Rather than sit back and complain about yet another industry going overseas, Glenn decided to do something about it and tasked the nascent 1791 clothing line.”

Again, nothing says working class like bringing a product into being via the verb “task.” Words aren’t important, though. The important thing is the idea a word expresses, which often differs significantly from its, you know, meaning. Consider the 1791 Supply Smith Zentzman Williams & Associates blue jeans ad copy:

There are two sentences with predicates in that whole paragraph, and one of them is false. The jeans Glenn Beck invented this year are not, in fact, “the first American blue jeans.” Those would be Levi’s, which Levi Strauss started making in the 1850s. For reasons of fundamental logic, it is unclear if that was also a time when things were timeless, but since none of the Mr. & Mrs. 1791 Supply Inc. jeans were built before 2012, I can only presume that we are living in such a time now. I guess it will continue for, um, ever.

The words “first,” “original” and “timeless” are all over the marketing material for Beck’s new line of pants, probably because those words imply authenticity. If you’re wondering about the thought process that starts with “these jeans are authentic,” sits down to come up with words to convey that concept and ends with a list of things his jeans are not—then rushes those words to the marketing people—you are making a fundamental error. Glenn Beck does not think. He knows.

It is an infuriating process to watch, like an organ that is powered by the dancing of a monkey. Beck is hardly a gravitational force in American politics and culture anymore, now that even elderly cable subscribers are tired of him. Somehow, though, even as a clothier, he manages to embody everything that is wrong with how human beings reason and communicate. He has the confidence of the autodidact and the intellectual honesty of the zealot. He seems to know nothing but that his ends justify any means. And despite his totalizing commitment to country and creed, his end somehow always winds up aggrandizing himself.

In other words, he is a garden-variety asshole. Why, then, is he so fascinating? I should probably add “to me” at the end of that sentence, but he is at least enough of a universal fixation to make the Atlantic’s blog when he starts hawking pants. I submit that Glenn Beck is important the way HPV is important. He is an example of a type of a type of bad thing that can afflict American democracy, a virus to which our system is uniquely vulnerable.

By himself, he will not kill you. He will make you more vulnerable to certain cancers, however: a self-righteous dismissal of compassion for others, a persecuted allegiance to tradition and popular ideas. He is the whole stupid mob reduced to one person, and he wants to lead. The best solution is to inoculate yourself with tiny exposures.