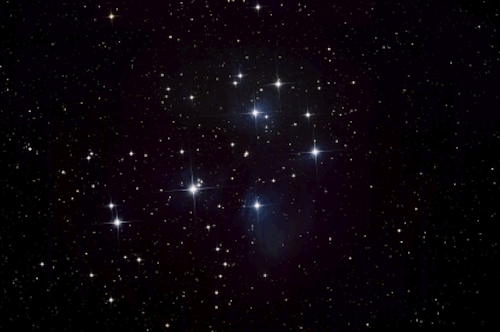 "You guys are retarded," says the Cancer Crab.

Back in the day (4000 BC–1948,) people looked to the alignment of the stars for broad assessments of their cultures. They did not know that the universe is constructed around lopsided circles like a child’s science project—probably because they had neither science nor, for very long, any particular child—so the seemingly random movements of the heavens constituted huge, baffling signs. Basically, the sky of our forebears was like the first dude your mom dates after the divorce: vast, inscrutable, and by those virtues ominously significant. If it looked all pretty, like Sagittarius the Dog was chasing Polonius the Squirrel across Poseidon’s Scales or some shit,*

then they were doing good. If there was a comet or the sun went out, their culture was doing Bad, and they had to ransack their homes looking for gay dudes or pork or books or whatever. It completely sucked to live in our ancestors’ world, is what I’m saying, which is why being alive is so much more popular among people who were born recently. Recently we have the germ theory of disease instead of pogroms, and instead of the stars we have the news. If you look up at the news just now, I believe you will discern a terrifying omen.

Here are the three big stories in American politics this morning:

1) We have a huge budget problem—or, if you prefer, a ginned-up budget problem that gives cynical hacks something to tell crazy people until the next election—that may necessitate the shutdown of the federal government. Nobody wants the government to shut down, and therefore everyone is threatening to do it. If we do not have a better-looking budget by April 8, we will turn off the United States.

I defy you to arrange all three of those stories into one coherent worldview. Any two of them work together, but when you add the third any two of them contradict each other. It’s like trying to make a two-dimensional figure out of three skew dots or, if you prefer, like trying to draw a constellation within a spherical field of stars. No matter how you connect the lines, it winds up looking like Alexander Hamilton striking his genitals with a hammer. America is talking about three things except Charlie Sheen, and those three things are impossible to think about simultaneously.

This phenomenon is called democracy. Presumably, the dude who writes Tabmoc! blog is, as we speak, composing a missive to his 300 readers about how the G.E. thing is a non-story, and the fear of a government shutdown is Democratic gamesmanship designed to overshadow the historical truth that corporate taxes are the highest they’ve ever been. Meanwhile, the Batcom! guy is emitting high-pitched shrieks about how GE’s zero-dollar tax bill is proof that the corporate tax code is unworkably complex, and we should impose a flat tax of 17% whose massive revenue loss will be offset by, um, tax cuts make the economy bigger. That’s all one frequency of shriek,*

but the point here is that contemporary internet democracy means not just a fragmented politics, but a fragmented discourse as well. These three narratives do not work as a single story because people don’t talk about them at the same time.

I was going to spin this into some blanket theory of how our time differs in this respect from times previous but, um, that is not true. Do you think they were talking about the same news in Atlanta and Boston in 1859? And that turned out okay, so I think this omen of fragmentation in our democracy is nothing but superstition. You can draw different constellations from different positions, and we can’t resolve them into one because we’re looking at the view from nowhere. As long as there aren’t any other bad omens, we’ll be—oh god. Alert head of local community.