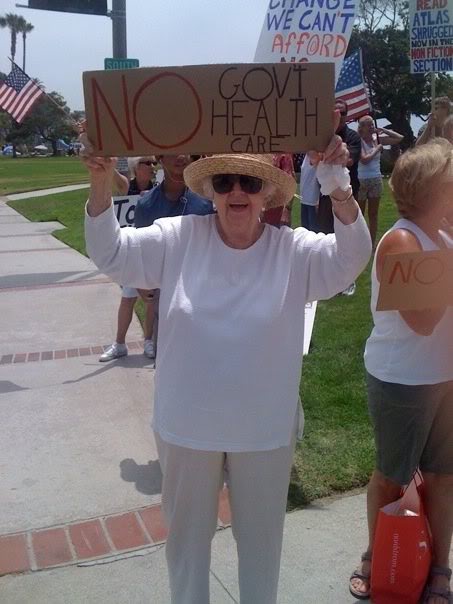 A person who would clearly not benefit from any sort of government-subsidized service.

I’m lucky—I was one of the two hundred fifty million-or-so Americans who had health insurance for the last few years. My employer gave me full coverage through Aetna, which was a good thing because I broke my right hand in March of 2007, then dislocated my shoulder six months later. Thanks to my comprehensive, private health care insurance, I only had to spend $14,700 on doctor bills that year. Initially it was about forty-five thousand dollars more, but after I filed my third appeal Aetna paid right away. It was really good timing, actually, because the New York State Insurance Board was scheduled to rule on my case the next day, and you know what the line at a government office is like.

So I can understand why people would be against health insurance reform. Sure, the system we have now is demonstrably predatory, has simultaneously increased public costs and private profits, and ranks behind Morocco’s but just ahead of Slovenia’s. But a government-subsidized alternative might be, you know, worse. Can you prove that it wouldn’t? Such is the reasoning of the opponents of health insurance reform, who have switched in recent weeks from arguing over proposed solutions to arguing against solutions in general. The result is a series of baffling photographs like the one above, as—for what I’m pretty sure is the first time in history—Americans rise up to demand that government not provide them with services.

Generally speaking, the common man does not take to the streets to protest in favor of the status quo. Such has been the case at the town hall meetings held by various members of Congress to discuss health care reform, however. By now, you’ve almost certainly read this memo from FreedomWorks, advising its volunteers of the best ways to disrupt public meetings between representatives and their constituents. FreedomWorks is run by former congressman Dick Armey, who A) once called representative Barney Frank “Barney Fag” on the house floor and B) is now a lobbyist for the DLA Piper law firm, which has accepted $6 million in lobbying fees from the pharmaceutical giant Medicines Company over the last five years. Lobbyists, of course, have to present reasonable arguments and/or money to members of Congress in order to pursue their own health care agendas. Old people who have been warned about government rationing in memos they got from lobbying groups run by former members of Congress now in the employ of pharmaceutical corporations, on the other hand, need only come to the school gymnasium and yell.

Which brings us to The Crank Factor. Timothy Egan, in today’s edition of his New York Times blog, claims that Sarah Palin’s recent Facebook screed about “Obama’s death panel” contributes to what he calls “crank speech”—baseless statements that do not foster intelligent debate, but stifle it. For those of you who missed it, Palin posted on Friday that “The America I know and love is not one in which my parents or my baby with Down Syndrome will have to stand in front of Obama’s ‘death panel’ so his bureaucrats can decide, based on a subjective judgment of their ‘level of productivity in society’ whether they are worthy of health care.” First of all, why does Sarah Palin spend so much time on Facebook? I mean, how many ex-girlfriends can she have? Second of all, no aspect of any proposed health insurance reform legislation involves any government panel ruling on whether a patient is sufficiently valuable to society as to merit care. That is insane. But, short of reading a 300-page bill, can you prove it’s not going to happen?

You can’t, because you can’t prove a negative, as anyone who remembers his high school rhetoric unit will quickly admit. But try sitting down to develop a fair, cost-effective solution to America’s health insurance crisis with a person who is shouting “No government death panels!” over and over again. Better yet, hold a town hall meeting to discuss the proper balance between choice and accessibility in a multiple-payer system with Annese Al-Ramdhan, who responded to Egan’s argument by saying, in the Comments section, “Was Terry schindler a myth? Was’nt she put to death in florida by order of the court because judge grier and Micheal schiavo decided that she should die despite the wish of her parents? The court charged police with gaurding her room so that no one could provide her with any form of nutrition or water.”

Terry Schindler, indeed. Normally, The Crank Factor is not a useful tool for either side in an argument. A car full of people trying to decide whether to stop at a hotel or just drive straight through to Akron will not be swayed by a guy in the back seat who demands to be taken to the moon. The debate over health insurance reform, however, is that rare situation where the American people convene to solve a problem, and one side does not want the problem to be solved. Whether there is a health care crisis in the United States—which spends more on care than any other nation yet somehow has a system that ranks 39th in the world—is debatable. But why bother convincing people that reform is not needed when you can just derail the debate entirely?

As Egan points out, crank speech drowns out free speech. The Crank Factor is the kryptonite of representative democracy—all you have to do is take the “informed” out of “free and informed citizenry,” and the will of the people becomes null and void. Of course, nothing gets done at that point, and the ship of state drifts aimlessly as we Americans collectively try to remember how an outboard motor works. Increasing The Crank Factor in American governance is a completely useless tactic, unless you are hoping to freeze things exactly as they are. Hence its appeal to corporate lobbyists and the Republican Party—two groups who seem increasingly interested in the federal government not functioning at all.

Normally, the problem of powerful actors exerting undue influence on a representative democracy can be solved by decentralizing the debate. Only a hundred guys are allowed to talk on the floor of the Senate, but you can’t buy off two hundred people times every rec center cafeteria in America. Town hall democracy is the arena in which the will of the people must be heard. That is why The Crank Factor terrifies me. The ignorant are almost always louder than the logical, and they are being organized from the top down.

During the waning days of the Qing Dynasty around the turn of the twentieth century, China fell under the role of the probably insane, definitely bitchy Empress Dowager Cixi. She emptied large portions of the imperial treasury to build a marble boat, among other questionable expenditures. When opposition to Cixi within both court and countryside became too fierce for her to sustain her rule, she and her cohorts installed as emperor a two year-old child, Emperor Puyi. They saw that they were losing control of government, so they propelled a toddler to power, thus ensuring that government would not be controlled at all.

The FreedomWorks demonstrators raving about government euthanasia, the Tea Party protestors demanding repeal of the income tax—these are the concrete manifestations of a Republican Party that is attempting to install a two year-old as emperor. If they cannot control American political discourse, no one will. Meanwhile, I’ve quit my job to be a freelance writer. I’ve found a pretty cheap catastrophic health insurance plan—it won’t pay for regular checkups or preventative care, but it will keep me out of bankruptcy court if I break my leg. And it only costs $450 a month. I was going to try to hold out and see if I could buy into the same plan federal employees get, but that looks like it’s not going to happen. I suppose I could try to convince my Congressional Representative to push for a government option, but there’s a line. A hundred and fifty people showed up to demand that he oppose provisions the current bill does not contain, and they won’t let him answer. If you’re reading this, their vote cancels out yours.