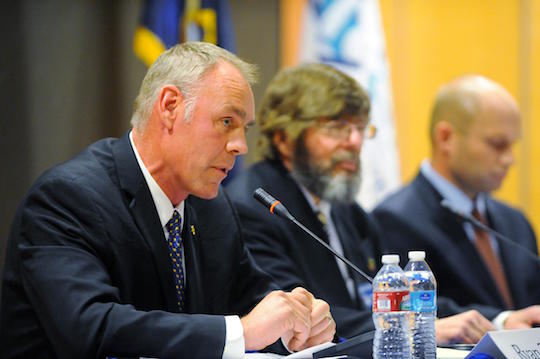 If you write about politics, don’t try to predict the future. Every right prediction seems obvious in retrospect, and every wrong one will haunt your career, unless your dad was the editor of Commentary. The wise commentator will limit himself to expressing opinions on things that have already happened, so that when people point out his obvious stupidity, he can distract them with the claim that reasonable people can disagree about matters of opinion. I know from experience. This week, though, I have broken my own rule and prognosticated on the fortunes of Rep. Ryan Zinke and gubernatorial candidate Greg Gianforte if they appear on the same ballot as Donald Trump—or on one from which Trump is conspicuously absent.

One of those scenarios will happen. Between now and the Republican convention in July, Trump will either secure the 1,237 delegates necessary to clinch the nomination or, you know, not. If he doesn’t, he is very likely to be denied in a brokered convention. That would be awesome for us, the viewing public, but it might be terrible for Republican candidates further down the ticket. Trump’s 62% unfavorable rating makes him the most unpopular man in the field. But he is also the most popular, and if he doesn’t leave Cleveland as his party’s nominee, the 40% or so of Republicans who support him might simply stay home.

That would be bad for Zinke and Gianforte. But the scenario in which Trump does top the Republican ballot might be comparably bad for the billionaire from Bozeman, whose campaign has been pitched to the same traditional, business-friendly Republicans Trump has alienated. Faced with a choice between the man who threatens to destroy their party and Hillary Clinton, they might decide not to choose at all. A Trump nomination would almost certainly dampen turnout, and it would be bad news for Gianforte in his race against a moderate-Democrat incumbent.

What a Trump ticket might do to Zinke in his race against Denise Juneau is less clear. In the contest between out lesbian and former Navy SEAL, it seems fairly easy to predict which direction Trump voters would go. But the number of Trump voters in Montana remains almost totally unknown. If the Montana electorate resembles that of Wyoming—where Trump won a dismal 7% in the primary—he might keep more Republicans away from the polls than he attracts.

You can read about my handicapping of this horse race in this week’s column for the Missoula Independent. Read it slowly, because you’re not likely to get another blog post until Tuesday. I’m going to Memphis this weekend to violate norms of decency with my friends, and I’ll probably be too hepped up on goofballs to report. But who knows? Soothsaying is a sucker’s game.