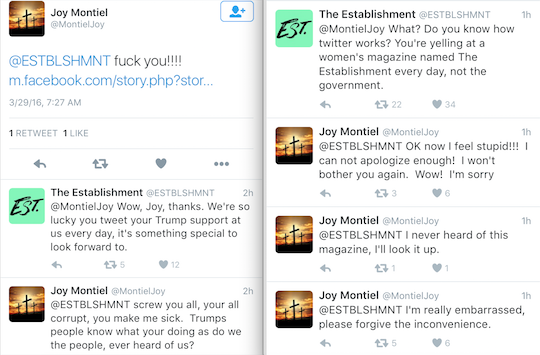 It’s kind of thrilling to see a Donald Trump supporter vituperate the women’s magazine The Establishment on Twitter. She has mistaken one of our most relentlessly abstract concepts for something specific and real. Can we blame her? Trump, Ted Cruz, Bernie Sanders, even Hillary Clinton—all the viable candidates for president rail against the establishment. No one can say exactly what it is, but we all hate it. So many of us have defined ourselves against the establishment that one can hardly believe it’s still established. The real estate tycoon who is the son of a real estate mogul isn’t part of it. Neither are the senators, nor even the former first lady. If the election continues on its present trajectory, the establishment won’t even include the president of the United States. So what is it? It’s the strategy that has ruled American marketing for decades.

By the time I was old enough to buy things, the establishment was an entrenched concept, if not a well-delineated one. Even bubble gum was sold on the promise that it was for me, not them, and there were more of them. At least they were more powerful than me. What kind of music did I like? Alternative. It was the most popular genre in America at that time, probably because it was so much better than mainstream rock.

The conceit of the establishment is likely a holdover from the 1960s, when youth revolution and youth marketing occurred at roughly the same time. Maybe they were the same event. The sixties were about individual freedom and questioning received values—first by demanding rights for minorities and women, but later, as the counterculture expanded, by buying clothes and recorded music. Youthful rebellion was political, but it was also social and then commercial.

The Freedom Riders struggled against southern legislatures and the US attorney general: concrete entities with defined political powers. But the hippies struggled against something more vague: social mores, square values, whoever it was who preferred Elvis and short hair. The genius of late-1960s marketing was to put Grateful Dead albums in the same category as the Montgomery Bus Boycott, by positioning them against the same enemy.

It is worth noting that the anti-establishment teens of the 1960s—which included pretty much all of them, if you believe Time-Life Books and the other established chroniclers of the era—are the septuagenarians who run the country now. It stands to reason that the politically active young people of the sixties and seventies compose the politically connected class of today. Clinton and Bernie Sanders were both college activists. You’d think their progress from young rebels to old politicians would mollify their contempt for the establishment, and maybe it has. But political rhetoric remains the same under the superannuated stewards of 1960s radicalism as it was when they were fresh-faced volunteers.

“Oh my goodness gracious,” Sarah Palin said in her endorsement of Trump. “What the heck would the establishment know about conservatism?” It was the kind of contradiction you can only advance with years of practice. If even conservatism itself is inimical to the establishment, what could the word “establishment” possibly mean?

What it always meant: people who aren’t us. The establishment is everyone who is keeping us down, denying the will of the people and getting away with it because of their established position. For the young people of the late 1960s, the establishment comprised all the people who had gotten there first, i.e. their parents. What right did they have to dictate musical styles and haircut lengths, just because they reversed the depression and won World War II? Decades later, having greatly expanded America’s individual freedom and grievously wounded its politics, economy and social mobility, that same generation blames a powerful establishment of other people. Who else’s fault could it be?

As a term, “the establishment” derives its power not from the strength of the forces arrayed against us, but from the severity of the problems we blame on them. That’s why the establishment is such a powerful idea in this election. Our economy founders. Our government does not function. Our politics, our media, and our culture insult our intelligence even as they mesmerize us for longer sessions each day. The establishment is winning, even though we all hate it. It must be because it is so thoroughly established. I wish we could figure out who those bastards are, because they couldn’t possibly be us.