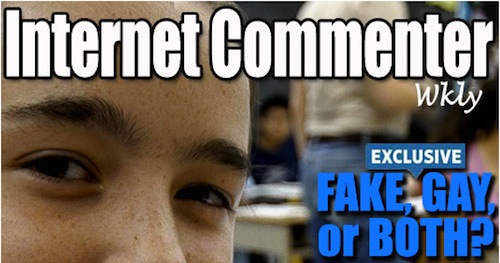 God bless Holy Taco, and check out holytaco.com for the full covers of Internet Commenter Weekly.

You should be listening to the Co-Main Event Podcast, hosted by my friends Chad Dundas and Ben al-Fowlkes. Even if you don’t follow mixed martial arts—which would be insane, like not following boxing during the 1920s—you can appreciate the funny segments, including MasterTweet Theatre with Sir Nigel Longstock. Sir Nigel is the world’s foremost theatricalist. He is also me, and as a Twitter account he is far more popular than my actual Twitter account. He may not have as many total followers yet, but in the time I spent writing the last two sentences he got three. Since yesterday, when Sir Nigel joined Twitter, he has accumulated 40 followers—a rate that far exceeds any acceleration @Combat_Blog ever achieved. Should I therefore conclude that Sir Nigel is a more successful endeavor than this blog? Obviously not, which tells us something about the internet as metric.

If you view success in terms of total audience—a legitimate perspective, considering the relative success of the Bible, say, and that sci-fi Western you never finished about the psychic horse—then Sir Nigel is the best thing I’ve done in years. His popularity is pretty much due entirely to the fact that Ben has 10,000 followers. That aspect of Sir Nigel is totally external to the work itself. Like the cream filling in a Twinkie, Sir Nigel’s dramatic readings of tweets would never be so widely consumed were they not surrounded by the spongy cake that is Ben and Chad. It therefore seems easy to say that the growth of @SirNigelL is not real success, predicated as it is on the popularity of an already-existing network.

That method, however, has determined success in American mass media since such a thing has existed. If we make popularity our primary metric, then the most successful television shows have succeeded largely because they were on major networks. The successful author is one who sells his book to Simon & Schuster, not the one who distributes his manuscript from a crate outside Cooper Union. In the arts, the work that no ones sees is by definition an unsuccessful work. It follows that the work everyone sees is the most successful, and gradations between those poles can be determined proportionally.

The internet is unique in the history of mass communication in that its measurement of those gradations is extraordinarily precise. Where television and newspapers could only estimate their audiences—and book sales only measured the activity of weirdos who read books—the internet tells us exactly how many people look at everything. Indeed, hits have become the curatorial algorithm at sites like Gawker, which reproduce the most popular stories and bury the unsuccessful ones.

Virtually everyone agrees that what Gawker does is vaguely horrible, just as everyone probably objects to the treatment of “popular” and “successful” as equivalent terms above. I know I do. In this sense, the internet does not offer us perfect knowledge of our audience so much as threaten us with it. Back when our measurements of audience were estimates, success was separated from popularity by a curatorial layer—critics, editors, programming executives—whose determinations of value were as if not more important than raw numbers. We still have those curators, of course, and still few people would argue that the most popular work is prima facie the most successful. But the authority of a quantifiable audience implicitly questions the authority of critics’ judgment. Why are those select people’s opinions a valid counterweight to the opinions of all other people combined?

They aren’t—not from a democratic standpoint, at least, and so one is forced to conclude that democracy has no place in matters of taste. Compared to what I like, what most people like is shit, and I refuse to budge from my position. Of course everyone should like what I like, but their failure to do so does not make me wrong. It makes them wrong, and as anyone who has watched the People’s Choice Awards or a YouTube video or a general election will tell you, people are wrong all the time.

The internet forces us to confront one of the most vexing possibilities of the modern age: that democracy doesn’t really work. It’s a good way to give the largest number of people what they want, but it is also a good way to force many of us to admit that we are not about making a lot of other people happy. We are about pursuing our own perverse versions of the good. As Sir Nigel has been saying all along, one must preserve a certain noblesse oblige.