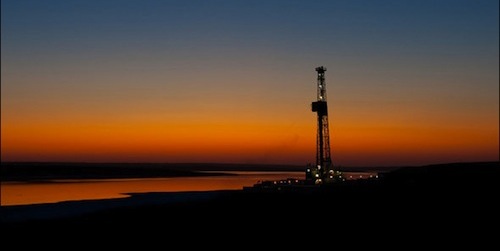 A rig in the Bakken oil shale formation of North Dakota

If you live in Montana or even know someone from here via Facebook, you have probably heard about Ray Dolin. The 39 year-old West Virginia man was hitchhiking in eastern Montana when he was shot by a passing motorist, apparently for no reason. The motorist was Charles Lloyd Danielson III, drunk on his way to work the oil fields of Williston. Danielson was apprehended a few hours later, and Dolin was picked up by another passer-by and taken to Frances Mahon Deaconess Hospital. He had been writing a memoir titled “The Kindness of America.”

That was the hook, in case you didn’t notice. The title of Dolin’s book—and when a man tells you he is hitchhiking across the country to research his book about kindness, don’t set your heart on a completed draft soon—is such an obvious irony that it has made the headlines of most reports. It’s easy to read this story about an arbitrary shooting*

and say that Dolin got his thesis refuted in the most jarring way imaginable. Then again, the first person to see him bleeding by the side of the road picked him up and took him to the hospital. The kindness of this event is all in how you look at it.

Consider the agreed fact that Danielson shot Dolin for no reason. That’s plausible if you are a hell-in-a-handbasket type like me—or like most journalists who cover roadside shootings—but it doesn’t really make sense. Even hardened assholes like Danielson have some system that determines when they do and do not shoot people. The belief that some dudes shoot people for no reason is a worldview, just like Dolin’s Kindness of America. The hitchhiker told police that he approached the car thinking Danielson had offered him a ride. It seems likely that his readiness to see kindness found a counterpart in Danielson’s willingness to shoot whomever might threaten him, even when the threat was not actually happening.

We all know somebody like that; if nothing else, many of you know me. Paranoia is a viewpoint, and like most viewpoints it finds confirmation at every turn. Consider the response of Valley County Sheriff Glen Meier:

We’re still the wonderful people in Montana we’ve always been, and we’ll get through this. Things are going to happen whether there’s the Bakken or not.

Ah, the Bakken—the shale formation in the Williston Basin that has turned eastern Montana and western Dakota into the best place in the country to see jacked-up Dodge Rams. If you are a man willing to work grueling hours for good wages, the Bakken is why you have been to Williston. If you are a sheriff in eastern Montana, the Bakken is a universal adaptor for crazy. Desperate 52 year-olds whom nobody knows pass through Glasgow because of the Bakken. The Bakken is responsible for much of the eastern Montana meth trade, too, like gas mining in Gillette. It may not be a causal relation, but you can see it nonetheless. In the rural west, petro-booms are the recent present, better known as the future. If you regard the future as a crueler place, monied if not richer—as small-town sheriffs are wont to do—the connection between senseless roadside shootings and the Bakken is implied.

So the Kindness of America is a Rorschach test. America is a place where friendly strangers let you ride with them wherever they are going. It is also a place where bums will attack your car on the way to the oil fields, as well as the place where felons shoot strangers for no reason. Most importantly, whatever place it is, it should be that other place—the place where hitchhiking across the country did not guarantee that something horrible would happen to you.

I submit that is the reason for this story’s popularity. The Kindness of America is a compelling premise, even as it is stunningly naive. In our multiplicity of viewpoints, it is the thing that we all agree is not real, whose unreality is a damn shame. Perspective is a choice, and most of us have chosen to be skeptics about the worldview we really want. That says something, too.