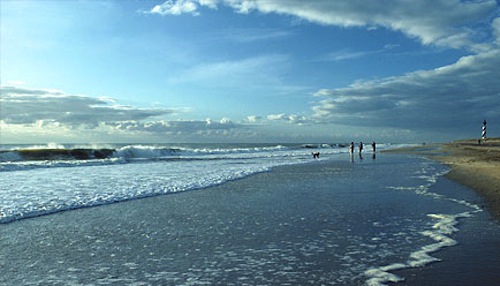 When you meet someone with a name like “Tom Thompson,” you know their parents taught them good values. Thompson’s group, NC-20, opposes the sea level estimate produced by North Carolina’s Coastal Resources Commission, which predicts a 39-inch rise by 2100. Coastal governments and NC-20 have convinced the commission to remove that number from their reports entirely. They’ve also orchestrated a bill that would make it illegal to calculate such estimates in the future. Quote:

These rates shall only be determined using historical data, and these data shall be limited to the time period following the year 1900. Rates of seas-level rise may be extrapolated linearly…

So North Carolina is in the process of making a certain kind of scientific model illegal. It’s worth considering what NC-20’s motivation is in this scenario. Presumably, they want a lower sea level estimate so that they can develop closer to the coast—a wildly cynical plan when you consider what will happen to the people living in those developments a hundred years from now, should the seal level turn out to be much higher. Confronted with information suggesting their plans are unwise, NC-20’s solution is to outlaw that information. Worst-case scenario, the state must contend with a massive economic and humanitarian disaster three generations from now. Best-case scenario: condos!

This brings us to a subject that I am personally uncomfortable thinking about: the limits of democracy. We’ve talked before about why you can’t legislate the truth, but that was kind of an essentialist dodge. The truth is only meaningful when it is perceived, and people are the ones who perceive it. Certain truths, such as the sky is blue, present conspicuous and persistent evidence in a way that makes them impossible not to believe. Others, like which equation most accurately predicts how much liquid water will be in the Atlantic Ocean a century from now, are not intuitively obvious. Whether you believe these sorts of truths is a matter of A) how much you know and B) how scrupulous you are in your thinking. That leaves a lot of wiggle room. If you get enough people together who A) don’t know much and B) think in a fashion that is less scrupulous and more convenient to their desires—also known as C) North Carolina—you can legislate the truth.

Of course, that only works if our legislated truth meets the qualification of not being intuitively obvious. The fatal flaw of postmodern constructions of knowledge and “different ways of knowing” is that the truth is out there—if not in the form of, say, an objective reality, then in the form of the bus coming down the street. At the moment of impact, you can believe as fervently as you want that no bus is coming, and your beliefs will still be spread evenly across the windshield. By the same principle, there will be a sea level in coastal Carolina in 2100, and nothing the people living there manage to believe will keep their ankles dry.

Presumably, the people at NC-20 know this. I’m into conjecture here, but I suspect very few of them subscribe to the instrumentalist construction of truth proposed by Jürgen Habermas, no matter how ironically they advance it. They know the sea level will be what it is in the future no matter what we say about it, and they are still willing to ignore our best guesses to get what they want now. That’s selfish. That they would make guessing illegal—that they would not only sacrifice the North Carolingians of the future to build some condos today, but also try to wreck the very mechanism by which those future people could protect themselves—that’s straight-up dastardly. You can vote on what’s true after all. In the end, though, you’re only really voting on what you know. A society that agrees not to know anything they don’t like will not last long.