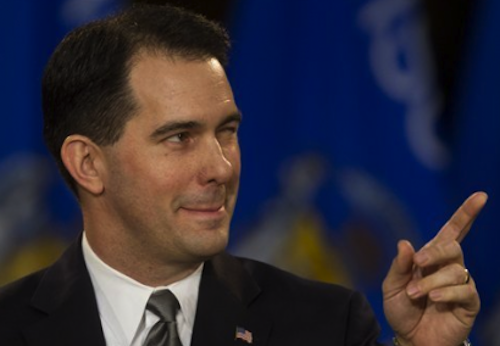 The recall votes are in, and Scott Walker has easily remained governor of Wisconsin. Walker won by seven points over Milwaukee mayor Tom Barrett, who is the same person he defeated in the election of 2010. Let it never be said that the Democratic Party is a political slug who believes its moral superiority entitles it to win elections simply by not being the other guy. Wait, I did that wrong—let it always be said that thing about the slug. There is a silver lining in the Wisconsin Democrats’ plan to do the same thing and get different results, though. Two elections between the same two guys two years apart give us a rare opportunity to isolate variables, and there happen to be two things different about Walker vs. Barrett 2010 and Walker vs. Barrett 2012: The Rewalkering. One, the Supreme Court declared limits on corporate political spending unconstitutional in Citizens United v. FEC. Two, the first Walker/Barrett tilt cost $18.9 million, whereas yesterday’s recall cost $63.5 million.

That’s a two-year increase of 236% in what it costs to run a state gubernatorial campaign. Granted, we’re talking about an especially prominent contest. The same bold moves that prompted this recall made Walker a rising conservative star, or maybe a conservative lightning rod—something high and potentially exploding, regardless. He was a state politician of national stature, which explains how he and his supporters spent $45.6 million as opposed to Barrett’s $17.9 million. That 45 mil does not include whatever it cost to call a bunch of people who signed the recall petition and tell them they didn’t need to vote in the actual election.

That’s abuse, though, and any electoral system would prohibit it. Sure, a system that allows anonymous donors to give unlimited money to third-party*

organizations whose sole function is to influence a given election makes it a lot more difficult to punish such abuse, but whatever. We’re interested in the rules we make, not the certainty that jerks will break them. And in this case, the rules we made have made one salient difference.

Lest you feel bad for Tom Barrett, consider that the money he and his supporters spent in this election nearly amounts to the total money spent by both candidates in the last one. Measured in dollars, his support system more than doubled in two years. Of course, his opponent’s financial support increased by a factor of four, which means that it doesn’t matter how well Barrett did at raising funds. Walker did better, again. In this way, these two candidates managed to achieve the same result by spending more than three times as much money.

That’s ironic, since the union-busting behavior that prompted this recall in the first place was undertaken to address Wisconsin’s budget shortfall. It’s only ironic if you consider economy and governance a means by which the people of Wisconsin could use their sum resources to address the problems of their state, however, like some kind of socialist. If you are some kind of American—and therefore consider economy and governance a grim war of all against all—you will recognize in the trebling of Wisconsin’s electoral spending a simple market phenomenon. More dollars enter the system. Ergo, each dollar is worth less.

In an electoral system where the candidates who spend the most money generally win, it doesn’t matter how much money you raise; what matters is how much more you raise than your opponent. To be more mathematically specific, what matters is the ratio. This year, Walker outspent Barrett by 2.5 to 1. In 2010, that ratio was 1.6 to 1. The difference between Walker’s and Barret’s spending in the 2010 campaign was only $4.1 million, whereas Walker’s edge in yesterday’s recall was $27.7 million. I’m hurling all these numbers at you to emphasize one principle: as the total amount spent on an election increases, what matters is not the addition and subtraction of dollars, but the multiplication.

It’s the ability to scale, in other words. That puts the voter—the individual who is not a corporation or union, but one person working with one person’s income—at a significant disadvantage. In 2010, the individual who donated the state-maximum $10,000 to Scott Walker’s gubernatorial campaign bought himself 1/1890th of the election. In 2012, the same donation got him 1/6350th. Of course, he could get around the state maximum contribution by donating his money to a Super PAC instead, in which case he could buy the same portion of influence for $33,600. But now we’ve exceeded Wisconsin’s per capita income.

So there is a concrete difference between electoral politics before Citizens United v. FEC and after. In 2010, the average Wisconsonian could give just under half his income to a candidate for governor, and that was it. In 2012, he is allowed to give as much as he wants, but he has to spend almost one-and-a-half times what he makes in a year to get the same result. The Supreme Court was right: money is speech, after all. It’s just that some people can now speak much, much louder than everybody else.