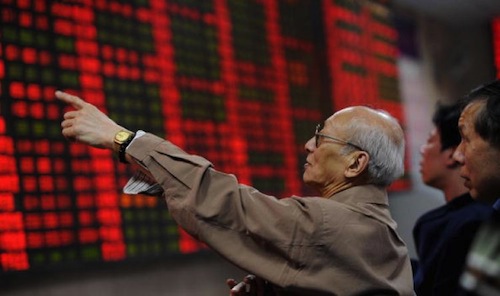 As you would know if you weren’t so preoccupied trying to choose worst crab, Monday was the 23rd anniversary of the Tiananman Square massacre, when the Chinese government rolled out tanks to quash pro-democracy demonstrations and killed several hundred protestors. They don’t like to talk about it. “They,” in this case, means the leaders of whatever weirdo system of government used to be run by the Chinese communist party, now the fabulously wealthy leaders of a billion-person market police state. When “they” refers to the Chinese people, they would like to talk about stuff like Tiananmen Square a lot. That’s why they/they were delighted/alarmed when the Shanghai Stock Exchange fell exactly 64.89 points on Monday, evoking the date 6/4/89.

It could have been a coincidence. The broad index of the Shanghai market is computed by totaling the market capitalizations of hundreds of Chinese stocks and comparing them to their value on December 19, 1990, arbitrarily set at 100. The 64.89-point drop constitutes a reasonable change for that index, although it sure is funny that it went down on June 4th, and that June 4th, 1989 was the date of the most controversial action undertaken by the Chinese government since World War II. For bonus points, the market opened Monday at 2346.98, which can be read backward as 89-6-4 with a 23 stuck on there. But now we’re into numerology, and you can see what you want.

I don’t know if you’ve heard this, but Chinese people are kind of into numerology, too. Ever the subtle manipulators, the Chinese government, blocked internet searches Monday for not just “Tiananmen Square” but also “stock market” and “index.” It’s hard to blame them; the combination of massively complex stock index, repressive government and June 4th is hard to ignore. I want to believe something is afoot. It would be virtually impossible for someone to coordinate the purchase and sale of hundres of stocks to reliably yield a 64.89-point drop, but hacking the exchange computers would be plausible. We’ll never know, of course, since according to China not just the stock drop didn’t happen, but also Tiananmen Square and Monday in general.

So the whole thing is fun. It’s also ironic that the means of indicting China’s ostensibly communist government for brutally repressing reform demonstrations is a damn stock market. China is the world’s last bastion of communism in name only. It’s the transitional statist government Marx considered an unfortunate necessity plus the market economy he considered the modern world’s fundamental evil. Basically, the Chinese government has realized that capitalism is rad as long as only a small portion of the populace can participate it, armed with a totalitarian state to enforce their will. China is real bad, is what I’m saying here. Considering that their government is willing to mobilize its massive security apparatus to censor a number in a stock market report, it will probably stay that way for a long time.