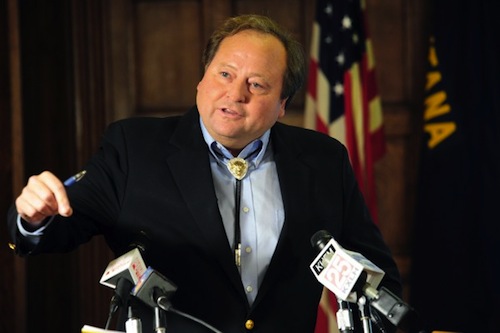 Say what you will about Montana—where, for example, the most liberal city in the state does not provide garbage pickup—we do preserve a certain political culture. The same Montana that devotes very little money to public services and has a legislature that meets for 90 days every other year was also one of the first states to legalize medical marijuana. When I first came to grad school here, it was legal to drink whiskey straight out of the bottle while driving on the interstate. Like the great libertarian states, Montana is suspicious of pretty much all laws; yet, like the great liberal states, it is also suspicious of corporate influence. Montanans are just suspicious generally. That’s why we have some of the tightest campaign finance restrictions in the country, and why Governor Brian Schweitzer took the New York Times yesterday to defend them.

Since 1912, Montana has prohibited corporate contributions to political campaigns. Contributions from individual donors are capped at less than a thousand dollars, and state legislators can’t be given more than $160. There’s a good reason for that. Back when the state was a massive repository for precious metals and Butte had a larger population than San Francisco,  mineral barons bought legislatures outright. Schweitzer’s editorial refers to William Clark, who gave Montana legislators ten grand apiece until they made him a US Senator, and the state’s history is littered with men of his ilk. Nineteenth-century Montana is an object lesson in the power of dollars to overcome votes in a democracy.

Thanks to Citizens United v. FEC, 21st-century America might teach the same principle. The Supreme Court’s ruling in that case overturns Montana’s campaign finance restrictions and those of other states. Schweitzer and several other Montana politicians are resisting that process, but a bunch of guys in a state where the legislature meets for three months every other year may not be so adept at playing hardball with groups like the American Tradition Partnership. That 501(c)4 organization has, as an act of public service, taken it upon itself to force Montana to comply with Citizens U and allow corporate spending in state elections. Their website also contains the informative article “Yet another home goes up in flames thanks to electric car.”

Maybe allowing unlimited spending on elections by corporations is a triumph of free speech. Maybe it protects the little guy, who under McCain-Feingold could not meaningfully participate in elections unless he was powerful and well-connected. Or maybe—and this is a crazy idea, here—people with a lot of money are the ones who benefit from people being allowed to spend as much money as they want on political campaigns. The keystone of a democracy is that everybody gets one vote, no matter how rich they are. If we want to preserve an egalitarian politics, we should be careful that we don’t make votes the second most important commodity.