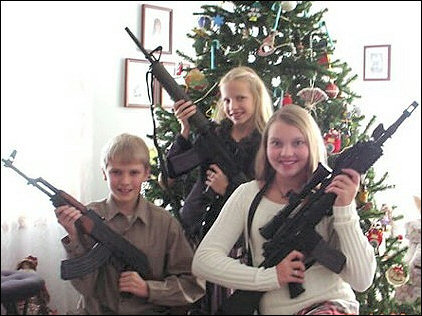 I'm not saying his parents would have preferred another girl, but he did get stuck with the Kalashnikov.

It’s been approximately four years since Fox News declared that the media and our socio-political overlords had declared War on Christmas, and I’m frankly a little frustrated with progress on the ground. The end of December is still the most expensive time of year to fly anywhere, and the mall is even more choked with wandering zombies dripping Cinnabon on their velour sweatsuits than usual. It’s starting to look like we’ve made no progress against Christmas at all—and at the expense of billions of dollars and thousands of lives. Okay, maybe not thousands, but even one more life lost in this war of choice is too many, and frankly kind of embarrassing. We’re America, dammit. We beat the Nazis in four years, and if we can’t do away with one more cultural product of German barbarians in that time, well, maybe we need to reconsider our own preeminence. Perhaps we should withdraw from the War on Christmas entirely and leave it to the Chinese.

Call me a coward, but you know who agrees with me? Christopher Beam over at Slate. His Christmasist name suggests that he may be a double agent sent to crush our morale, but Beam cites a steady decline of Google and Lexis-Nexus search results involving the phrase “war on Christmas” since Fox coined it in 2005. He also points out that our Commander-in-Chief—whom we elected on the assumption that he would crush Christmas, pleated pants, Kid Rock and other strongholds of lame white Christian America—has turned out to be one of our enemy’s strongest sympathizers. Obama is, after all, a devout Christmasist who has continued some of the policies of his predecessor, including the National Day of Prayer.

Also like his predecessor, though, he’s sent out a holiday card instead of a Christmas card, to the predictable consternation of Fox News. When will Barack Obama learn to stop doing things that George Bush did, lest he anger the man’s supporters?The President’s abject failure to not acknowledge that there are American citizens who are not Christians has sparked renewed skirmishing in the W on C, led by South Carolina Representative Henry Brown. Brown has introduced a resolution that Congress officially disapprove of any attempt to ban Christmas, in light of Obama’s disgusting insistence on referring to the period between Thanksgiving and New Year’s as “the holidays.” “This kind of reproach is exactly what my Christmas resolution, introduced to the House of Representatives earlier this week, is against as the resolution expresses support for the use of Christmas symbols and traditions and disapproval of all attempts to ban or limit references to Christmas,” Brown said, presumably without a lot of preparation.

Other brave warriors have hearkened to his charge. Garrison Keillor—who never, ever stops talking no matter how loud you yell at your radio—has used his weekly Salon.com column to inform “Unitarians and Jews” that “Christmas is a Christian holiday—if you’re not in the club, then buzz off.” I think we’ve all loved Keillor these many years because he’s one of the few writers in the country brave enough to stand up to Unitarians and Jews, but he is not alone. Representative Michele Bachmann—who A) grew up in Anoka, Minnesota, which is the same town that Keillor grew up in, and B) is a whore—has submitted her second annual Christmas resolution to Congress. “Whereas Christmas is a national holiday celebrated on December 25th…” it begins, before going on to express opposition to any attempts to “ban references to Christmas.” No word yet as to what compromise supporters of Bachmann’s Christmas bill have reached with supporters of Henry Brown’s Christmas bill in committee. Still, divided though our enemies may be in the House, they are united in their purpose, and their resolve must be reckoned stronger than ours.

No patriot wants to say such a thing, but it appears that the War on Christmas may be unwinnable. It’s only a matter of time before we are overrun, the battlefield splashed with red blood against green uniforms, crows picking the flesh from our bones and then roosting in a nice scotch pine. Gone are the heady days of 2005, when federal law prohibited the utterance of “Merry Christmas” and you could run through Wal-Mart punching chicks in reindeer hats right in the neck. Somehow, against all odds, the Christmasists are winning. They began the fight vastly outnumbered, with only a few pirate cable news stations and Congressional seats to organize their operation, but they have risen. Now is the time to forget our dreams of empire, and consider how we and Christmas can negotiate peace with honor. I know these words will fall hard on year ears, comrades. We fought a just war, and we had God on our side, but evidently that wasn’t enough.