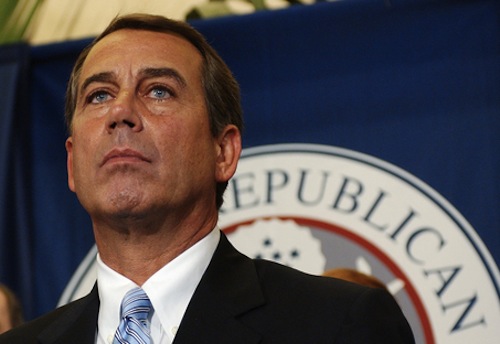 Boehner—whose 2008 campaign reported just under $620,000 in donations from the insurance and health services industries—delivered an impassioned speech to his colleagues Saturday night, in which he A) described the House as “enshrined in the first article of the Constitution by our founding fathers as a sign of the importance they placed on this House,”*

and B) claimed that the bill would probably fund abortions and no one had read it. His remarks, which degenerated into yelling at several points, were characteristic of the rhetoric of the day. Protesters on Capitol Hill called Rep. John Lewis (D–GA) that word that you mouth but don’t say when you’re singing along with Jay–Z, shouted “faggot” at Barney Frank, and spat on several congressmen and their staffers. Michele Bachmann predicted a 30% increase in abortions, despite specific prohibitions in the bill against using federal funds for that procedure and an executive order declaring same. Taking advantage of the absence of subjects and verbs in both rumormongering and Twitter, Sarah Palin tweeted, “Shocking new questions re:whether military healthcare plans r protected under Obamacare. How will underpaid troops afford their own purchase?” The house specifically exempted members of the military from the coverage mandate by a vote of 403-0, so Palin either forget to include the word “resolved” or was deliberately misleading people, but whatever. It’s not a lie if you type it on your cell phone.

On the opposite side of the aisle from the Babies and Soldiers Party, remarks were hardly more restrained. Nancy Pelosi described the passage of the bill as a historic moment, saying that “Today we have the opportunity to complete the great unfinished business of our society and pass health insurance reform for all Americans that is a right and not a privilege,” which is how a sentence comes out when more than one person writes it. Thank god the business of our society is at last completed, though. Rep. Marcy Kaptur (D–OH, not speaking to Boehner about anything but Buckeye football) declared “a new day in America.” James Clyburn (D–SC) compared the bill to the civil rights movement. President Obama put it a little more modestly: “This isn’t radical reform,” he said. “But it is major reform.” He was probably just trying to act like he’d been there before.

After a year of fighting, it’s not surprising that our national political class should get caught up in the moment. Fortunately, we have a reasonable press to put the bill in perspective. Writing in the Times, Ross Douthat said that now we would see whether the extravagant promises of liberals would play out.  “If liberals are right, health care reform will save tens of thousands of lives every year,” Douthat writes. “American life expectancy will either leap upward, vindicating the bill’s supporters, or it won’t.” Douthat didn’t specify whether we’ll have to wait until Christmas to enjoy our higher life expectancies or if they’ll take effect as soon as the President signs the bill into law. Fox News, which refrains from comment on its hard news site, merely noted that the next logical step in health care reform is for each state to challenge the constitutionality of the bill individually. The article quotes Florida Attorney General Bill McCollum, who says that “The health care reform legislation passed by the U.S. House of Representatives this last night clearly violates the U.S. Constitution and infringes on each state’s sovereignty.” For his part, the governor of Idaho, whose name is C.L. “Butch” Otter, signed legislation requiring his state’s attorney general to sue the federal government over the bill’s mandatory coverage clause.

That clause, which assesses a penalty of $95 or 1% of taxable income on individuals without health insurance, exemplifies just how not-sweeping, un-radical and non-historic yesterday’s bill was. Is everyone in the Combat! blog offices surprised and glad that it passed? Oh yeah. Is it the gift to our children or the gross violation of our liberty that the media-political complex claims it is? Certainly not. We got no public option, no price controls on individual plans, no limits on $600 aspirins at hospitals. Those of us who work in our own personal insanity hives can’t buy into the plan John Boehner gets, and will likely continue to pay for high-deductible cancer insurance that doesn’t cover visits to the doctor. Meanwhile, the insurance industry gets 32 million new customers. Have Pelosi, et al given us a gift comparable to what Martin Luther King gave the south? No. Have they broken the free enterprise system and prepared our collective anuses for the finger of totalitarian government? Nope. They made some laws about how insurance companies can do business, and took a small step toward fixing a system that 36 other countries, including Morocco, manage more effectively than we do. They didn’t reform health care; they made some laws about it, and those laws will hopefully leave the country a little bit better.

In the process, they made politics inestimably worse. The historical value of the last year’s debate lies most likely in its exposure of an unsustainable system. The Tea Party movement, the repeated declarations of fascism and Marxism, the hyperbole of the doomsaying right and the triumphal left, the 45% of Americans who at one time believed in an aspect of the bill that never existed—these are all symptoms of a system of government that needs more reform than health care. Over the last fourteen months, we have passed a modest bill at an immodest cost. What will the thousands of Americans who were told that insurance regulation was an act of tyranny do now? Now that John Boehner has informed his constituents that America is ruined, now that Steve King as called for a velvet revolution, now that Pelosi has declared our society complete and Glenn Beck has declared it Poland, 1939, where do we go from here? To hear our elected officials tell it, we should take to the streets in exultation or in rage. While we’re out shaking our keys, though, who’s going to run the country? It will take clear heads and plain speech to do it, and I’m not sure we have enough.