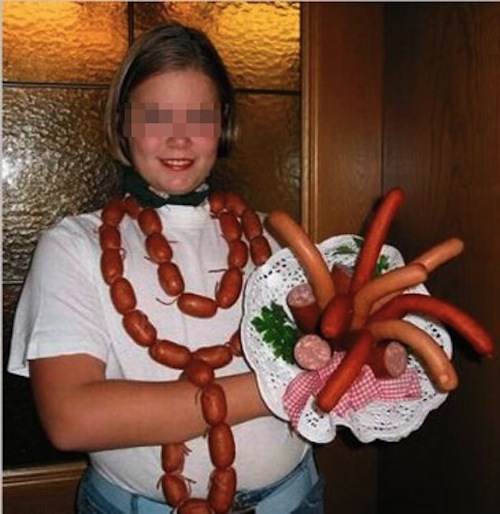 From our friends at www.lamebook.com. Thank god they blur out the eyes, or someone might recognize this picture.

It’s Friday, and it’s not just the week that’s coming to an end. I don’t want to alarm you guys, but right now is the very last moment of recorded time. Terrifying, isn’t it? The pyramids, the rise and fall of Rome, the revolutions of the Enlightenment and the struggle against fascism, rock and roll, the Jackson 5, Friends—all that is over as of today. Everything is behind us, and we just don’t know what’s ahead. Frankly, this moment has never occurred before, so we don’t have much to go by. All I can say conclusively is that this has been a great week for hyperbole, absurd comparisons, and end-times pronouncements of all sorts. Fortunately, that’s just the kind of thing we at Combat! blog go in for. Incontrovertibly, this has been the last week in human history. Let’s all, like, gaze upon it.

You can’t have a zoo without monkeys, and you can’t have a loosely themed link roundup about ridiculous overstatement without Steve King. The Man Who Made Iowa a Punchline Again appeared on Glenn Beck’s radio program Wednesday, where he agreed with Beck that the attempt to reform health care policy is “an affront to God.” Besides describing the bill as “the nail in the coffin on our country,” Beck was incensed that Congress would convene for a vote on a Sunday—during Lent, no less. Beck describes the decision to pass a law on the Sabbath as “something our founders would have never, ever, ever done, out of respect for God.” Beck has evidently forgotten about 2005’s so-called Palm Sunday Compromise, in which a Republican Congress met on the Sunday before Easter to pass a law moving the Terry Schiavo case to federal court. To be fair, though, that was urgent business. Keeping one white woman from going off life support was a lot more important than getting 33 million brown people on.

I guess I agree with Glenn Beck, though, when he says our faith has been perverted. Just look what the love of Christ has done for Texas, where Don McLeroy’s ultra-conservative politico/religious bloc has had its way with the State Board of Education. Props to roughly all of you, who sent me the news that Thomas Jefferson and the separation of church and state are now out of the Texas history curriculum, and Phyllis Schlafly and the Moral Majority are in. Those of you wondering exactly how that state decided that, for example, Thomas Aquinas and John Calvin were Enlightenment philosophers should check out excerpts form the liveblog of the BoE meeting. Here’s how you prove that Aquinas, who died 400 years before the publication of Principia and Leviathan, was a more significant Enlightenment thinker than Jefferson: you vote on it. Still psyched about liberal democracy, you guys?

David Brooks isn’t. This morning, in a column cheerfully titled “The Broken Society,” he argues that the dual forces of personal atomization and economic centralization have left Americans broke, alienated and largely ungovernable. Brooks regards the rise of libertarian conservatism as an expression of every-man-for-himself cynicism, and cites the British writer Phillip Blond, who theorizes that we are currently the victims of two revolutions. The first was social—the countercultural uprisings of the 1960s that “displaced traditional manners”*

and made individual rights more important than group responsibilities. The second was economic—the market revolutions that consolidated local stores into gargantuan national chains and replaced community banks with nebulous financial conglomerates. The result of these revolutions, Brooks says, is an increasingly senseless economy that brutalizes a citizenry too stricken with anomie to do anything about it. He says the answer to this problem is greater emphasis on politics at the community level. Apparently, Mr. Brooks does not follow the Texas Board of Education.

Then again, maybe he’s just upset about Congress, like seemingly everybody else. It looks like some form of health care reform is finally going to pass this weekend. I should be happy about that, if not for the legislation than for the admittedly minor vindication to an embattled President whom I still happen to like. Hard out there for a Democrat, though, when your party is doing shit like this. Props to Mose for the link. Having assured itself that it has enough yeas to pass health care, the House Democratic leadership has begun decided which representatives will be facing tough elections in November and can therefore vote against the bill. Remember that whole short-term/long-term discussion we had about Steve King’s rhetoric on Wednesday? What better way to show the American people that you believe you’re acting in accordance with their wishes and not for political gain than to present vulnerable reps with the gift of being allowed to vote against your centerpiece legislation. Just over a year into one of the largest majorities of the last three decades, the Democratic Congressional Caucus just assumes that it is governing without the support of its constituents. Will someone please get the Democratic Party into a loving relationship?

I don’t know about you, but I’m feeling kind of sad at this point. Only two things can cheer me up. The first is this 1941 remembering of F. Scott Fitzgerald by John O’Hara, which he published on the occasion of Fitzgerald’s death. It’s a tender portrait of an author whose personality many of us know primarily from two extremely unflattering anecdotes in Hemingway’s A Movable Feast,* 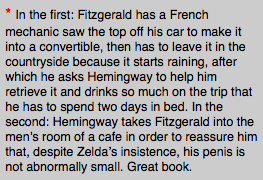 and it portrays Fitzgerald as a man isolated by his own genius. “If you saw him too long a time his intelligence, about which he was almost over-conscientious, would go to work, and he would let you bore him,” O’Hara writes. It is a charitable and fundamentally decent way to describe a man who, because of the ways in which he was wonderful, was also in many ways pretty horrible. That’s my favorite kind of person to read about, narrowly edging out those how, because of the ways in which they are horrible, become in certain ways wonderful. Which brings us to the second thing that can cheer me up: Victoria Floethe. Those of you who have been reading Combat! blog for a long time might remember V-Flo and the alarmingly rapid increase in the number of things she seemed to represent, before she abruptly disappeared from the dim green spotlight of the internet. Good news for schadenfreude: Victoria Floethe is twittering again. The woman who last year wrote an article in Slate complaining that the economic collapse had made people unfairly resent her for being rich appears to have reinvented herself as an actress, or at least as someone who is taking acting classes. (Q.v.: “Rehearsing with the lovely Taryn.”) She also A) regularly posts information about what she has for breakfast, apparently not realizing that such behavior is journalist shorthand for pointless use of social networking sites and B) has gone to London! “Seriously considering buying a $500 Lock & Co. hat,” she writes Wednesday. “An incredibly beautiful black pillbox.” It’s been a rough road for Victoria Floethe, but it looks like she’s finally going to be okay. An incredible pillbox, indeed.