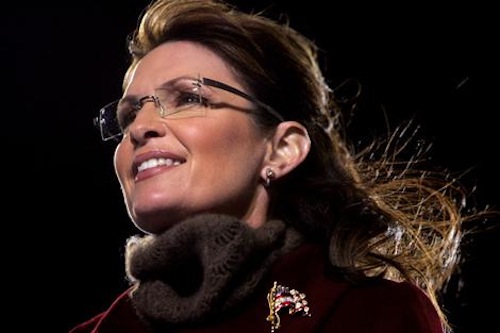 Palin’s next tweet, “Take a look here for more on this,” links to this article at the National Review. Here I use the term “article” loosely, since the entirety of the piece is a quote from the GOP.gov website, though it still comes with a byline. Daniel Foster’s cut-n-paste job is a masterpiece of intellectual dishonesty. It begins by noting that on Thursday, House Armed Services Committee Chairman Ike Skelton (D–MO) announced his intention to introduce legislation specifically stating that TRICARE satisfied the coverage mandate. Rather than taking this move as a sign that TRICARE will be protected, Foster/GOP.gov announces that “This is an explicit admission that the final Democrat health care bill does not protect these plans.”

There’s no time to write “explicit/implicit?” in the margin with a red pen before Foster/GOP moves on to its next point, which is that the Senate bill has not been subjected to any such admission. “The Senate-passed health care bill, which the House is expected to ‘deem’ passed on March 21, 2010, omitted protections for military health plans that were included in the House bill.” Foster/GOP pulls a Michelle Malkin with this one: the Senate bill doesn’t really “omit” the House bill’s protection of military plans, since it was passed before that House bill and those protections were introduced. It’s like being mad because you weren’t on the guest list for your parents’ wedding. While the article admits that “The minimum essential coverage language in the Senate bill does cover ‘the veterans health care program under chapter 17 of title 38, United States Code,'” it questions whether this coverage will extend to survivors and dependents.

Of course, chapter 17 of title 38, USC, itself specifically covers survivors and dependents, as a 30-second Google search reveals. Maybe Daniel Foster and GOP.gov have switched to Bing. Sarah Palin, the National Review and the Republican Party have dedicated themselves to publicizing a “shocking question” that can be answered quickly and definitively by anyone with an internet connection, or even a particularly good phone. Moreover, they’ve organized their rhetoric in such a way as to make the problem ostensibly revealed by that question insoluble. Chairman Skelton’s introduction of language specifically stating that TRICARE fulfills the mandate is an “admission that the final Democrat health care bill does not protect these plans.” Yet the absence of that language also damns the Senate version of the bill. Correcting the quote-unquote problem proves that it exists, and not correcting it proves that it is a problem. It’s an absurd dilemma, and clearly the only solution is to scrap health care reform altogether.

—neatly expresses the advantage enjoyed by the contemporary Republican Party, and by anyone who wants to ensure that nothing is decided. You can’t prove a negative. Nancy Pelosi can’t prove that TRICARE won’t not satisfy the coverage mandate and the White House can’t prove that their statement won’t not be enforced, just as they couldn’t prove that the fiscal elements that earned the bill a good CBO score wouldn’t be violated in the future, and just as they couldn’t prove that there was no such thing as a death panel. If Sarah Palin were trying to ensure that no one was unfairly subjected to a fine for violating the coverage mandate, she’d have the same problem. But she isn’t—she’s in the business of looking for problems, not solutions, and you can always make up a problem.

Sarah Palin is in the curious position of having maintained her political celebrity over the last year largely as a consequence of health care reform, despite having no—zip, zero, nada—reform plans of her own. In this sense, at least, she is genuinely a pundit and not a politician. The Republican Party, which has devoted the last year to identifying problems in Democratic proposals and the last weekend to just making them up, has no such excuse. They claim to be serious about addressing the serious problems facing our country, but how would they act differently if they weren’t?

Like a lot of shocking questions lately, that one has thus far gone unanswered. In the meantime, chapter 17, title 38 of the US Code became an argument by omission in a GOP press release, which became a whole-cloth article in the National Review, which became a manufactured scandal on the House floor, which became a 140-character insinuation that health care reform would hurt our troops, which was read by 110,000 followers and re-tweeted god knows how many times. In a healthy discourse, we’d have responsible citizen politicians to stand between rumors born of ignorance and the American people. But we don’t have responsible citizen politicians—we have Sarah Palin. And Sarah Palin’s got us.