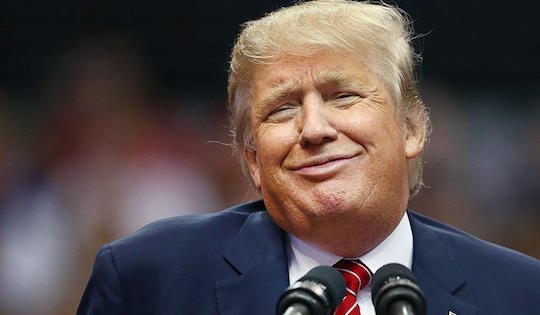 “My fellow Americans: ain’t I a stinker?”

Appearing on MSNBC’s Morning Joe today with, we can only assume, another guy named Joe, Vice President Biden said Donald Trump “knows nothing about foreign policy, nor should he, based on his background.” On the Today show, which Joe Morning will take over in the event Matt Lauer dies, President Obama warned the billionaire could still become president. But Trump’s campaign is dead in the water as of this morning, when he made a terrible gaffe in his press conference. Quote:

[Obama is] the most ignorant president in our history. His views of the world, as he says, don’t jive, and the world is a mess.

Jibe: a verb meaning to be in accord with, to agree. Jive: noun, a form of slang associated with black American jazz musicians, or verb, to taunt or sneer at. He might as well have said “for all intensive purposes.” Trump is sure to catch a lot of jiving after people hear his malapropism, in the next few days before he officially withdraws from the race. Oh, before I forget, he also said Russia should find Hillary Clinton’s missing emails. Video, sweet video, after the jump.

Trump is doing two things here. One is a favorite rhetorical strategy: riffing on the news cycle to deride his opponent. The last bad thing to happen to Clinton was this weekend, when apparently Russian hackers leaked emails implying the Democratic National Committee favored her campaign. At this point, a window on the Trump brain screen pops up, saying “YOU KNOW WHAT ELSE [EMAILS]?” The chicken Trump has instead of interiority pecks that window furiously, causing the Republican nominee for President of the United States to say this:

Russia, if you’re listening, I hope you’re able to find the 30,000 emails that are missing. I think you will probably be rewarded mightily by our press.

Yeah, the press probably would pay for emails the US secretary of state deleted from her private server, those venal bastards. Anyway, that’s Trump seizing an opportunity to bring up Hillary’s email scandal, like a comedian who sits down each morning and mutters what’s in the news. Unfortunately, the other thing he’s doing is calling on a foreign government to conduct espionage in the United States.

“Yeah, but against his political opponent,” you might say. That was essentially Trump’s defense this afternoon—that and the peculiar argument that it was all a fait accompli:

They probably have them. I’d like to have them released. . . . It gives me no pause. If they have them, they have them. If Russia or China or any other country has those emails, I mean, to be honest with you, I’d love to see them.

See what he did there? Russia hacking the DNC was bad, but the public learning about bias in the DNC was good. Wouldn’t it be great if we could get the transparency without the hacking? We could, if the hacking had already happened. If the bad thing Trump told the Russians to do this morning were already done, first of all, let’s see those emails, and second, it wasn’t even a big deal that he said it. Which he didn’t. Wink!

Trump is being a real dastard with this one, because he’s not wrong. I’m glad the ostensibly neutral DNC officers who worked against Bernie Sanders got caught. I wish the news had come from Anonymous and not protofascist cybernetic bears, but I guess I’m glad to know. I don’t want the hostile government of a KGB ghoul to shape American elections, but if it had to happen…

This brings us to the one part of all this that genuinely didn’t have to happen: the DNC did not have to play favorites in 2016. Hillary was going to win anyway, right? Debbie Wasserman Schultz and her cohorts risked the credibility of the Democratic nomination and a substantial number of Sanders voters to fix a squash match. Yes, hackers found the proof, and the world’s least charismatic revolutionary timed it to spoil the convention. But those misdeeds would not have been possible had the DNC done its job properly.

I guess I’m saying you can run the given circumstances back as far as you want. If Russians have Clinton’s missing emails, they should release them. If they don’t, Trump shouldn’t have told them to look for them. If a frog had wings, he wouldn’t bump his ass hopping. And if Jim Gilmore were running against Lincoln Chafee right now, we’d all be better off. Think about that.