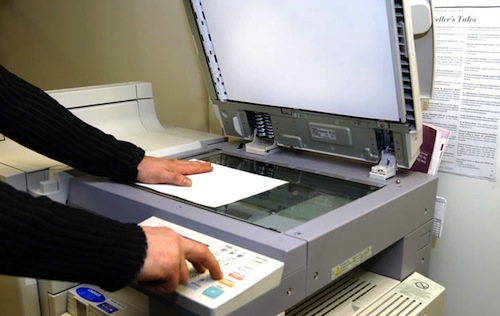 What the fuck is that thing?

If you’re reading this, Combat! blog has mystically unbroken itself after prosecuting some sort of sympathy strike with AT&T’s cellphone architecture and Japanese reactor coolers for the better part of the day. Form follows function in this case, since today’s post is about both technology and relentless uncooperation. Ben “The Angle” Gabriel sent me this transcript from a trial in Ohio last year, in which Lawrence Patterson—then head of information technology for the recorder’s division of the Cuyahoga County fiscal office—claims not to know what a photocopier is. He obviously does, of course, but he has to be made to admit that before opposing counsel’s argument can move forward. Thus we observe a classic Tactic of Argument colloquially known as TFD.

Patterson and his attorney insist that the question, “During your tenure in the computer department at the Recorder’s office, has the Recorder’s office had photocopying machines?” isn’t fair because there are many different types of photocopying machines. This is what we call a diversion, and it’s akin to defending yourself against arson charges by setting several small fires in the courtroom and offering to help put them out.

Patterson repeatedly claims that he wants to answer the question correctly, but he also keeps answering it with, “When you say photocopying machine, what do you mean?” For the next ten pages of courtroom transcript, he enjoys the rhetorical equivalent of the sociopath’s advantage. The examining attorney, David Marburger, becomes exasperated like two pages in. “Let me be clear,” he asks Patterson. “The term ‘photocopying machine’ is so ambiguous that you can’t picture in your mind what a photocopying machine is in an office setting?”

Midway through the exchange, Patterson denies having ever having heard the phrase “can you photocopy that for me?” We are clearly in the realm of lying at this point, but his position remains recognizably secure to anyone familiar with the argumentative practice known as TFD, or Total Fucking Denial. The applications of TFD are myriad, but its execution is consistent: one simply denies what would normally be basic premises of an argument, forcing one’s interlocutor to prove everything or, more likely, to give up.

Perhaps the most famous example of TFD is the Shaggy hit “It Wasn’t Me.”*

Even though his girlfriend has personally seen him with another woman, “both butt naked / bangin’ on the bathroom floor”—and, if the video is to believed, is now watching footage of that same act of congress on her cell phone—Shaggy advises his friend to simply insist that “it wasn’t me.” This plan is based not on the hope that Mrs. Shaggy’s Friend will actually believe his claim, but that that she will eventually tire of using analytical logic to demonstrate the validity of sense data/permanence of identity.

Unless she is a professor of poststructuralism, that strategy is probably not going to work. Because it requires an utterly baldfaced lie, TFD is only viable in arguments that will not be resolved by convincing your interlocutor, but rather by the evaluation of a disinterested third party. That limits its value in interpersonal relationships, but it makes it an almost nuclear-level weapon in law and, interestingly, politics.

Consider Sarah Palin’s recent claim that the word “refudiate” was a coinage of her own deliberate invention. Clearly it was not, and a person speaking to her friends in such a situation would be forced to simply admit that she misspoke. Yet because she was speaking to the American people—who just may be called upon to provide an up/down assessment of her general competence in 2012—Palin was able to relentlessly claim that what she did was both intentional and fine. She’s used “refudiate” regularly since, in the rhetorical equivalent of looking at a video of yourself having sex with your neighbor on the floor of your bathroom and saying, “Who is that guy?”

Back when our national discourse was heavily organized around shame, this sort of behavior was suicidal. Now that we have admitted the fallibility of normative judgments made from our own viewpoints, though, we have adopted a sort of legalistic approach to obvious lying, by which we have to either prove it wrong or let it go. Like a judicial system that presumes innocence, that’s probably good overall. It’s a pain in the ass when you’re trying to get to the next question, though.