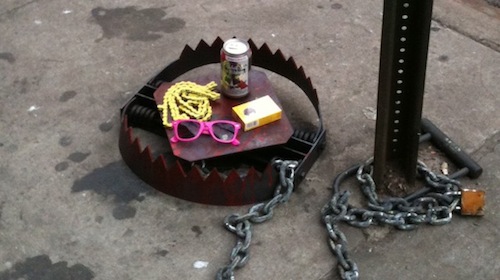 This photo of one of several hipster traps to appear recently around New York was sent to me by Big Game, and it clearly represents a new epoch in the nebulous socio-aesthetic construction that is hipsterdom. First of all, I bet I could get that beer out of there without getting my hand caught. Second of all, the best part about irony is that you can even use it on irony. Once you do, your newly ironic approach to your previously sincere experience of irony seems like the only reasonable perspective. It’s the logical next step, even though it is prima facie absurd, and the paradox between these two understandings of the same relation can be resolved by noting that, oh yeah, the thing you did in the first place was absurd, too. This week’s link roundup is full of such progressions, in which logic demands more absurdity from absurdity. It’s the inductive narrative of history, and it’s happening all around us—even to Glenn Beck. When’s somebody going to make a trap with a Bible, an airplane bottle of scotch and a Ho-Ho in it?

First, the good news: no one in the Republican party has yet realized that “we must reduce the deficit” and “we must lower taxes” are conflicting messages. While half of the party works diligently at cake-having, the cake-eating portion of the GOP—led by House Ways and Means Committee chair Dave Camp—wants to lower the maximum personal and corporate income tax rate to 25 percent. Don’t worry, though; they’re going to pay for some of it, at least, by closing loopholes throughout the tax code, effectively raising taxes on other income brackets to give the nation’s wealthiest another 30% off the lowest rate of taxation they’ve had in 60 years. Remember when we absolutely had to lower taxes on rich people? It was right before deficits were so high we had to shut down the government. Now we have to lower taxes on rich people again. When asked how the country might cover the enormous reduction in revenue such a plan would engender, Camp demurred, saying he didn’t want to “put a fence around what we’re trying to do.” The fence is made of logical fucking reasoning, plus accountants.

On the other side of that fence is a bankrupt federal government, which might not strike Camp as such a terrible scenario. Republicans’ commitment to the “starve the beast” model—of demolishing revenues in order to force the spending cuts they can’t get by democratic means—reached its natural fruition in Michigan governor Rick Snyder’s plan to impose “financial martial law” on struggling municipal governments. The plan, which has already passed the House, would allow the governor to appoint “emergency managers” with the power to “fire local elected officials, break contracts, seize and sell assets, and eliminate services.” These newly-appointed executives would not be answerable to the people they govern, since “an amendment to require Emergency Managers to hold monthly public meetings to let people know how they are governing was rejected by Senate Republicans.” Governor Snyder should not get all the credit for coming up with a system by which top-down appointees become the supreme executives of municipal governments, however, since that plan was originally developed by King George III.

Meanwhile, in actual martial law, Pfc Bradley Manning stands naked in solitary confinement for seven hours. You might remember Manning from the WikiLeaks affair, when he put 300,000 classified documents on a CD labeled “Lady Gaga mix” and gave them to Julian Assange. Now he is in the brig with intermittent access to his clothes, a decision that spokesman First Lt Brian Villiard said was “not punitive.” “It would be inappropriate for me to explain it,” Lieutenant Villiard told the New York Times. “I can confirm that it did happen, but I can’t explain it to you without violating the detainee’s privacy.” It Would Be Inappropriate For Me to Explain It was the original title of the Shaggy hit It Wasn’t Me.

Claiming that concern for Bradley Manning’s privacy kept him from explaining why he wouldn’t let Bradley Manning wear clothes put Villiard in mortal danger of having the corpse of George Orwell leap out of the ground and bite his face off, but fortunately supernatural justice was busy in Japan. On his radio show earlier this week, Beck explained that he is “not saying God is, you know, causing earthquakes,” but added that he is “not not saying that, either.” It’s just that “whether you call it Gaia, or whether you call it Jesus, there’s a message being sent and that is, ‘hey, you know that stuff we’re doing? Not really working out real well.’ Maybe we should stop doing some of it.” Before I address that theory, I want to take a second to collect my YES YOU ARE FUCKING SAYING THAT, GODDAMMIT. YOU JUST SAID IT ON YOUR NATIONALLY SYNDICATED RADIO SHOW. Have we as a society really reached the point where professional rhetoricians can make the statement, “I am not making this statement?” Listening to Glenn Beck is like that logic problem about the one alien who always lies and the one who always tells the truth, only the second alien is home sick.

I don’t know about you, but I’m depressed. I can’t go into my weekend like this, or I will be even more spiteful and unpleasant than usual. Fortunately, my brother sent me this palate cleanser. What could be a better antidote for the illogic of logical progressions than a repudiation of nostalgia? Also clapping:

I feel much better.