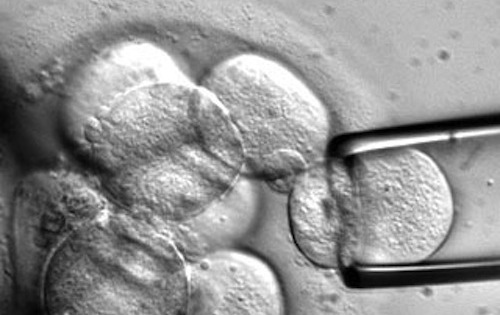 Researchers in Berlin have announced that a man who underwent stem cell transplants for treatment of leukemia seems to have been cured of his HIV as a result of the procedure. I think I speak for all of us when I say: there’s a dude a Berlin who has HIV and leukemia? Does he go to church? Also: does this mean we have a cure for AIDS? Shockingly, it looks like it kind of does. According to the excitingly-named Blood magazine, “results strongly suggest that cure of HIV has been achieved in this patient.” While having pluripotent stem cells massively transplanted into your bone marrow likely will remain a less popular treatment than having sex with a virgin, it appears that we have found a solution to the great epidemic of our time. All it takes to cure what the religious right once called “the gay plague” are stem cells harvested from embryos that the religious right considers tiny babies.

Perhaps this will become a national issue. Opponents of stem cell research have already established that they consider the destruction of embryos*

not worth the potential medical advances. Now that there is an actual medical advance, and that advance just happens to be in the field of curing a disease that maybe they kind of like anyway, we might be in for a debate. I submit that any of the following discoveries would promise less controversy:

1) Skin tissue from single mothers is found to cure cancer in deacons.

It’s this kind of synergy that encourages one to believe in a supreme being. I’m just guessing, here, but I bet that supreme being considers the physical integrity of innocent, dead embryos more important than the lives of grown people who have had sex or, in some cases, been bitten by mosquitoes. We’ll find out soon.

In the meantime, congratulations to science for (possibly) once again curing a horrible infectious disease! The official score is now Science one gajillion, Bible three. Bible hasn’t put up great numbers since refusing to eat pork reduced the risk of contracting trichinosis, but I’m sure things will turn around. In the meantime, thank you, nerds.