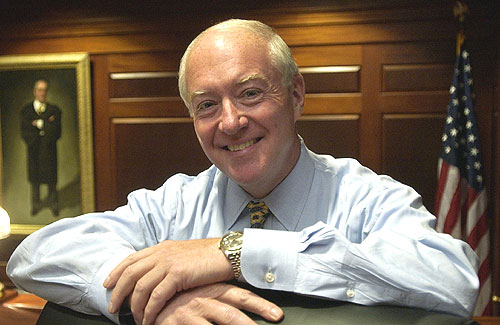 Yesterday, a federal judge in Richmond, Virginia ruled that the individual coverage mandate in Obamacare is unconstitutional. That is not as big a deal as it sounds. Judge Henry Hudson declined the plaintiff’s request to suspend implementation of health care reform pending appeal, so Obamacare will roll out as scheduled. Even if Hudson had ruled the requirement that most Americans carry health coverage was, in the words of John Jay, “just constitutional as shit,” the mandate wouldn’t take effect until 2012 anyway. By that time, this discussion will have reached the Supreme Court, and Judge Henry Hudson will be a literal footnote to history. Don’t worry: everything is cool with Obamacare. The independent judiciary is fucked, though.

A few paragraphs in, our Times article notes that Judge Hudson has “a long history in Republican politics in north Virginia.” That scooping sound you heard was Gawker observing that part of that history is a current ownership stake in a lobbying firm that spent last year convincing people that Obamacare is, um, unconstitutional.

Since 2003, Hudson has received between $32,000 and $108,000 in dividends from his share of Campaign Solutions, Inc. The firm itself took in $9,000 over the last year for services rendered to a plucky young Virginia Attorney General named Ken Cuccinelli, who happened to be the lawyer in whose favor Hudson ruled yesterday. So, you know, don’t let the name mislead you: a campaign is not the only solution.

Again, none of this really means anything.*

Hudson is one link in a chain of appeals, and none of them can snap backwards and slice our ear off until we’ve been towed all the way to the Supreme Court. Still, the affair troubles. Not because it’s an instance of smoky-room dealing and palm-greasing and possible mountebankery—welcome to Virginia. My problem is not that a judge heard arguments from one of his own clients in a case that his lobbying firm has been paid to have an opinion on for the last two years. It’s that nobody noticed until this morning.

We know the Republican Party has the power to line up a judge and an AG on a case it cares about in at least one state. What have the Democrats got? Because as near as I can tell, they had to read this stuff on Gawker. Am I to believe that no one thought to look at Judge Hudson’s “long history in politics in North Virginia” and see if they couldn’t find a conflict of interest?  If this is the Democratic Party we’ve got, you might as well start teaching your kid the Lord’s Prayer now. He’s going to need it for school next year.