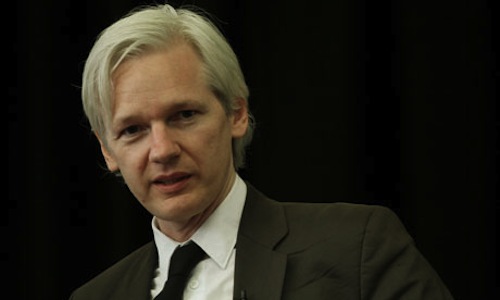 The sentence “Julian Assange has not yet been charged with a crime,” became a problematic way to discuss Wikileaks a few months ago, when Swedish authorities accused him of rape. So Julian Assange has not been charged with espionage or—as one Fox News reporter suggested, in apparent ignorance of his Australian citizenship—treason. Instead, he is the object of extradition proceedings for failing to stop what began as consensual sex when his condom broke. Meanwhile, in the same treason interview, Joe Lieberman suggested that the New York Times be investigated for publishing Assange’s leak of diplomatic cables. An “investigative” phone call from the senator’s office already prompted Amazon to stop hosting his website, and MasterCard and Visa prohibited donations to WikiLeaks last week. While the US government decides whether what he did was spying or journalism, his website has been shut down, his income stream has been frozen, and Julian Assange has been put in jail. But he hasn’t been censored.

It’s worth noting that, aside from the soft lean of Lieberman and other individual congressmen, the American government didn’t do any of this stuff. They just made it clear that they dislike Assange very much, and several multinational corporations did the rest. Visa, Mastercard, Amazon, PayPal and a dozen or so smaller entities divested themselves from WikiLeaks voluntarily. All they had to do was recognize that he was a less powerful enemy than the United States government.

The complexity of the situation is thrown into relief, as usual, by the simplicity of Sarah Palin’s reaction. Speaking on Facebook, for Christ’s sake, Palin opined that Assange should be hunted like a terrorist. Quote:

First and foremost, what steps were taken to stop Wikileaks director Julian Assange from distributing this highly sensitive classified material especially after he had already published material not once but twice in the previous months? Assange is not a “journalist,” any more than the “editor” of al Qaeda’s new English-language magazine Inspire is a “journalist.” He is an anti-American operative with blood on his hands. His past posting of classified documents revealed the identity of more than 100 Afghan sources to the Taliban. Why was he not pursued with the same urgency we pursue al Qaeda and Taliban leaders?

What Palin fails to recognize but helpfully conveys in her statement anyway is that we are hunting Julian Assange like a terrorist. He has been publicly identified as an opponent in our vague war against people who want bad things to happen to the United States, and any way we can think to hurt him is now far game. We haven’t convicted him in a court or charged him with a crime, but we have smashed his metaphorical printing press, shut down his business and declared him a rapist. And we didn’t even need any of our legally established instruments of government to do it.

Contrary to Palin’s claim, Julian Assange does not have “blood on his hands.” None of the Afghan sources referred to in Wikileaks’s earlier leaks has been harmed, and the damage from this latest round is thus far limited to a general sense of embarrassment. His publication of classified documents is “terror” only in the sense of that endlessly applicable phrase “War on Terror”—our belief that any opposition to our perceived national interest is immoral, and that anything we do to our perceived enemies is justified. We are at “war” against this terror, not in the sense that we are fighting military battles against other nation-states, but that we have declared our willingness to ignore our scruples in pursuit of our enemies.

I submit that a fair and benevolent state does not have enemies. It has defendants; it has convicts; it has disinterested laws. The quality of our government is arguable, but I also submit that we do not have a fair and benevolent state. Last week proved that the state doesn’t stop at our government; it extends to credit card companies, to web hosting services, to online retailers and bankers. To say that our government is not censoring Julian Assange is to ignore that all these entities acted in our government’s declared interests. To say that they are not part of the state because we don’t get to vote for them or influence their conduct is to miss the point. Our lack of influence is the point, and it’s a terrifying one, and we need people like Julian Assange make it, one way or the other.