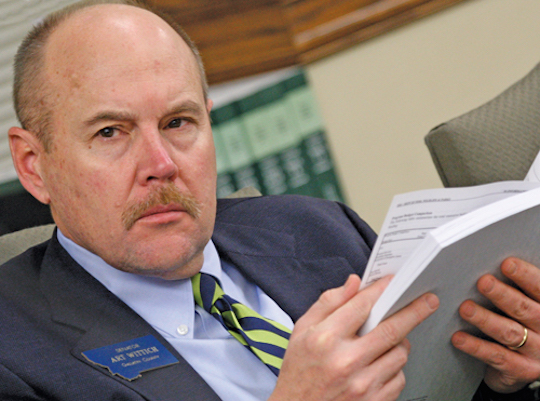 Rep. Art Wittich (R-Belgrade) would miss you, too, were he not such a good shot.

The Montana legislature adjourned its 2015 session last week, three days ahead of schedule. The last joyous spectacle out of Helena was the repeated failure of HB 416, an infrastructure bill that enjoyed bipartisan support but needed 67 votes to pass because it involved bonding. House conservatives shut that one down with a quickness, not so much because they hate sewer and road repairs but because they wanted to finally stop something. As Art Wittich put it to the Billings Gazette:

“Frankly, from a conservative standpoint, it may be the only thing we did in this session. We have virtually lost everything that we came here to accomplish, including truly compromised legislation.”

He was right, finally. Conservatives in Helena started the session with immense power, and they squandered it by systematically opposing compromise within their own faction and from without—much as I predicted. They forced moderate Republicans into a working majority with Democrats, inadvertently creating a legislature more productive and liberal than the one they despised in 2013, when they were weaker.

It’s almost as if ideology were not a substitute for governance. You can read that and other crazy theories in this week’s column for the Missoula Independent, which reaches Combat! blog late today because I spent the morning letting strangers inspect my testicles. We’re still very sick, but it’s not as bad as the first doctor thought. We’ll be back tomorrow with Friday links and test results.