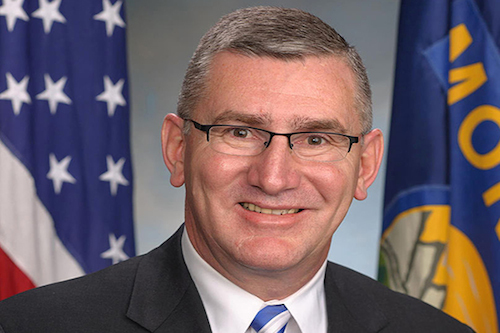 Senator John Walsh (D–MT) wears a facial expression he plagiarized from a box of Lemonheads.

It is extremely generous of the New York Times to say that Montana Senator John Walsh “confronts questions of plagiarism,” given that the last 800 words of his master’s thesis are taken verbatim from a paper published by the Carnegie Endowment for International Peace. The document that Walsh turned in to get his degree from the US Army War College in 2007 contains several uncited passages from related papers on the internet, along with several passages that are footnoted but not quoted, despite being copied from the original sources word-for-word. I encourage you to read the Times article, if only to get a sense of what a mash-up Walsh’s thesis appears to be. There’s also a rad denial from the Senator himself, but you’ll have to click on the jump to read that.

Here’s the Times account of how Senator Walsh responded when he was shown the plagiarized sections on Tuesday afternoon:

“I didn’t do anything intentional here,” he said, adding that he did not recall using the Carnegie and Harvard sources. Asked directly if he had plagiarized, he responded: “I don’t believe I did, no.”

Walsh’s claim that he “didn’t do anything intentional” with regard to his thesis is hard to accept. Unless someone else wrote it for him, everything in that document is a product of his intent. You don’t write a master’s thesis by accident; trust me—I tried. Walsh’s claim that he accidentally plagiarized several hundred words from internet sources might suggest some kind of copy-paste error, except that another example from the Times piece implies he typed everything out manually:

At the end of this sentence, which Mr. Walsh included without quotation marks, he footnoted a reference to a 2003 article in Foreign Affairs by Thomas Carothers, a prominent foreign policy expert. The only difference between Mr. Walsh’s paper and Mr. Carothers’ essay is that Mr. Walsh wrote “advisors” rather than “advisers” and did not use “had.” In other instances, Mr. Walsh swaps a synonym for a word in the original document.

So Walsh definitely did some stuff intentionally. Whether he thinks what he did was plagiarism is debatable, but the conclusion of such a debate would not matter. Maybe he believes that swapping a synonym here and there technically absolves him of plagiarizing, but A) he’s wrong, and B) even if he were right, it wouldn’t make any difference to us.

I am probably more sensitive about plagiarism than most people, but it’s still a big deal. If for no other reason than to keep society moving forward, we must distinguish scholarship from original thought. I want to know what is newly said from what is merely new to me. It’s not about knowing who deserves credit for what—unless we’re talking about work produced to satisfy the requirements of an academic or professional degree, in which case it’s absolutely about knowing who deserves credit for what.

Walsh submitting other people’s ideas to the War College is like him submitting a video of someone else climbing the wall to basic training. At first, it seems like a problem because he has tricked us in order to get a prestigious degree. Then you realize it’s a problem because we need soldiers to be able to climb over a wall.

Maybe—and I know this sounds crazy—if Walsh had written his own thesis about promoting democracy in the Middle East, he might have learned something that would make him a better senator. Education, particularly education of our military officers and appointed leaders, is not about them proving that they deserve something. It’s about them learning stuff. Writing papers is to joining the degree team as attending practice is to joining the football team. We’re not just hazing people, here.

In a just world, this plagiarism thing would end Walsh’s election bid. He already did some questionable stuff with the National Guard, and now we know he cheated his way past a major milestone in his Army career. By yesterday afternoon, Walsh’s campaign had stopped contesting the plagiarism charge, but they “suggested that it be viewed in the context of the senator’s long career.”

What career? Senator Walsh is not running to be sent back to Iraq. He’s running to represent the people of Montana in the US Senate. After what we read yesterday, I question whether he can truthfully represent himself.