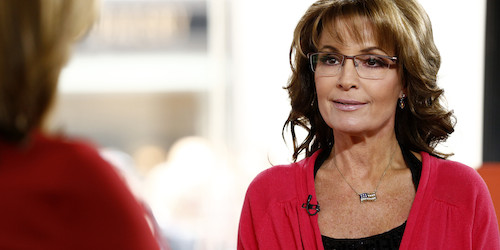 Can we take a moment to marvel at how quickly Sarah Palin became what she is now? A scant six years ago, she was the Republican nominee for Vice President of the United States. She once claimed to read all newspapers and magazines. Now she’s a female version of Larry the Cable Guy, except instead of making jokes she tells people to buy guns. All right, I guess she also makes jokes: after getting pulled over for speeding last week, she told TMZ that “I wasn’t speeding; I was qualifying.” She also claimed it was because she was listening to Sammy Hagar’s “I Can’t Drive 55.” I think I speak for all of America when I say “no, you weren’t.”

She’s a regular person, just like us. She’s also a former governor and beauty queen with multiple reality shows who bought a $1.75 million extra house on short sale, but whatever. She loves NASCAR-themed bumper stickers and Sammy Hagar. Except, for reasons that I can neither identify nor defend, I am 100% certain that she was not listening to “I Can’t Drive 55” when she got pulled over.

I suppose we could check radio playlists from the oldies station she claimed to be listening to at the time of her ticket. But that skirts the central issue, here. Even if Palin is telling the truth about what was on radio when she got pulled over, it doesn’t matter. What matters is why we find her claim so viscerally, immediately unbelievable.

I propose that Sarah Palin saying she got a speeding ticket while rocking out to “I Can’t Drive 55” is like the Christian Slater character reading Dostoevsky in Heathers. It’s too pat, too of a piece with her persona. The problem with Palin is that she is all one thing: from her “hooah” pin to her claim that “waterboarding is how we baptize terrorists,” she resembles a poorly-written character more than a human with interiority.

That makes sense, given that Palin is writing herself. The catch is that the Palin narrative is happening in the real world, at least ostensibly. She operates on a spectrum of artificiality that runs from reality shows to news channel commentary to public speaking appearances. One might expect reality-show Palin to be the most fake, and policy-advocating Palin to be most authentic. Perversely, though, she is at her most exaggerated at political events, which in theory relate most directly to how we run this country.

It’s not so much that Palin rapidly shifted from politics to entertainment; it’s that she began approaching politics as entertainment. Her appearance in TMZ notwithstanding, the media still treats her as a political figure rather than an Oprah-esque lifestyle brand. Yet she is not selling a political position anymore. She’s selling an identity—guns, NASCAR, soldiers, church—that happens to include blaming Obama.

That identity has become extremely marketable as a result of events in politics during the last six years, but it is not, itself, political. The people who love Sarah Palin are the same people who have kept “I Can’t Drive 55” on the radio for three decades. Lately, those people are superficially interested in politics. They aren’t sufficiently involved to, for example, make John McCain the President, but they are involved enough to click Like on Palin’s Facebook page.

The challenge built into that model of political/entertainment success is that it’s based on who she is, not what she does. It’s hard to get news coverage of who you continue to be, so Palin has to keep saying new things that reiterate who she is. When she appears in the press for getting a speeding ticket, she has to work in both a NASCAR and a classic rock reference, to reinforce that she is both a redneck and an old white person. It’s a quick reminder to the rednecks and old white people who support her that, whatever else she may be, she is one of them.

At this stage in her career, though, she isn’t anything else. She went from being the more viable half of the Republican ticket to being an impression of Tina Fey’s impression of her, all in the span of six years. Like that caricature, 2014 Palin is a cluster of recognizable personality traits exaggerated to absurdity. The problem is that she’s not doing comedy. She’s still doing politics, sort of. She still purports to be a truth-teller, even when she is obviously lying.