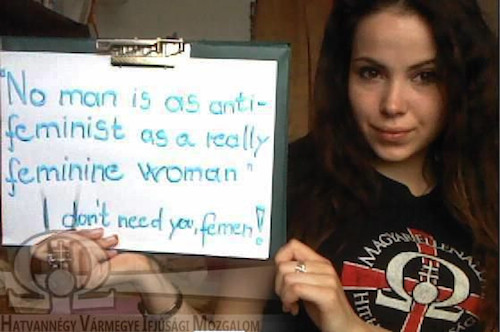 The woman pictured above opposes the Hungarian Femen movement, which is either a civil rights thing or a “satanists-run prostitutes’ abuse of women’s dignity and grace,” depending on whether you are an editor at Hungarian Ambience. To Hungarian Ambience I say kudos for mastering the English possessive. Also, you guys are fascists. Maybe it’s just my internet, but it seems like fascism is blowing up in geopolitics right now. Humanism ruled and totalitarian systems drooled for so long that I didn’t notice when everybody stopped reading and started wearing shirts about church. Now we’ve overrun with patriots proudly waiving their rights. Today is Friday, and the humans have turned against humanism. Won’t you flee to a high tower with me?

First, the good news: Islamofascism is not just a term that Donald Rumsfeld failed to popularize in 2002, but a real thing that proceeds from his policies thanks to ISIS, which now calls itself The Islamic State. The Ominous Cloud was too whimsical. In Raqqa, which used to be Syria, The Islamic State has stabilized the food and water supplies and runs a functioning city government. It also cuts off people’s hands and sends women home to put on more clothes. I’ll say this about The Islamic State: they know what people like, e.g. sufficient rule of law to run a children’s clothing factory. The Times doesn’t specify, but I assume it’s one of those for children, by children kinds of factories.

Aren’t you glad you don’t live in a country of backward shopkeeps who put avarice and superstition ahead of reason? Say you’re glad—kaboom! The United States contains fewer people who believe in anthropogenic climate change than any other country polled by Ipsos Mori. A mere 54% of us believe global warming is real, possibly because the very act of trying to explain something makes the Great American Land Ape dumber, now that the news is a clash of shrill propagandas. Sorry—I kind of exploded into despair, there. It’s a thing that happens to me when I read a poll about facts.

I know what will cheer me up: the warm, supportive and—dare I say it?—beautiful faces of Women Against Feminism. But it’s not just their faces, although obviously that would be enough. It’s their trenchant insights into why they don’t need feminism. “Because men and women have bigger fights to lead,” one young woman writes, suggesting that we turn against a third enemy before adding that she is “tired to be, as a woman, represented by some hysterical hipster whore.” I assume she is referring to Sen. Barbara Boxer. Here’s a fun question for the Kombat! Kids out there: is feminism a trending topic on the internet right now, or do you just think so because you read Facebook? Answer: you can’t know! Curse god and die!

First read this Clickhole article, in which Buzz Aldrin reminisces about the time he ejected a horse into space. Monster props to Stubble for the link. This little gem cleaves to one of The Onion’s classic forms, the businesslike description of something awful. I submit that what really makes it, though, is the third guy who’s against it:

The next thing I knew, it was time to stuff the horse into the airlock. Neil and I were shoving him in there, and the horse was screaming, and the other guy that was with us was yelling, “No, no, no! Don’t launch the horse!” but we said, “Shut the fuck up for a second, and just let us jettison this horse into the infinite blackness of outer space.” And that’s exactly what we did.

Or maybe that’s fascism—I can never keep them straight. It’s all the costumes and funny walks. I want to walk serious and wear sweatpants, even to dinner. I want to feel the wind of nobody telling me what to do blowing through my hair at all times. I want to run free.