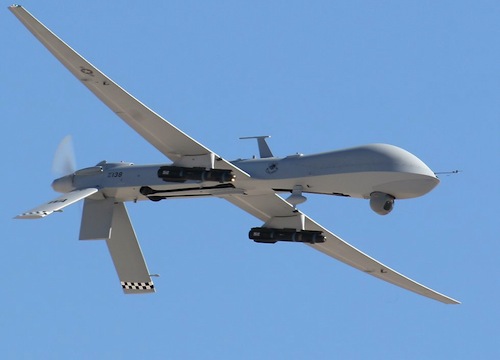 The obvious advantage of an unmanned drone is that if it gets shot, no one’s family is sad. It brings us that much closer to the ideal war, in which no one is killed but a bunch of stuff explodes and we get what we want. From a narrowly American perspective, drones are that ideal war. Theoretically, an all-drone military would allow us to prosecute any armed conflict with zero loss of American lives. We could invade Iran or finally make Kim Jong-un shut up, all from the safety and comfort of computer labs in Texas.

Which brings us to a crossroads. Pretty much throughout history, the major advances in military technology been offensive. Nuclear weapons, the machine gun, cannons, the longbow, steel blades—all of them increased killing power and, therefore, casualties on the other side. Exceptions include trench warfare and tanks, but the latter have artillery mounted on them and no one wants to employ the former ever again. The point is that drones buck this trend.

Drones are not valuable to us because they are such devastating weapons. They’re scary, but compared to a hydrogen bomb or an aircraft carrier they are not an instrument of superior force. They are weapons of minimal risk—zero risk to life, which I submit is the primary deterrent to war. They’re expensive, but the United States has not shied from spending money on its military. What we don’t like to do—what we like to do way less than, say, radical Muslim terrorists—is expend human lives.

That’s why we’re better than those people. It also provides them with their own paradoxical strength in so-called asymmetric warfare. “You love life,” Osama Bin Laden said before we shot him in the eye, “and we love death.” The willingness and even desire to die gives the suicide attacker advantage in many situations. The introduction of unmanned drones is a counterweight to that; if they do not care whether they die, we can construct engagements in which dying is, for us, impossible.

The problem with suicide attackers is that one loses the threat of death as a deterrent. The thing that prevents you from invading your neighbors house and wrecking his stuff is not that you can’t get in; it’s that you can’t get out. The number of places that are safe from attack goes way down when the attackers take their own deaths as a given, and by the same token, the number of wars that sound appealing goes way up when you know that none of your people is going to die.

If you were the president of the United States, which would be a more difficult order for you to sign:

Another way to put it is to say that drones do not reduce the number of people killed in warfare; they change the kind of person killed in warfare. Given the radically lower cost of deploying them, it seems reasonable to worry that drones might reduce American casualties of war but increase our willingness to prosecute military campaigns, leading to a net increase in number of casualties total. They make war safer—for us—and therefore more appealing as an instrument of international diplomacy.

Right now, of course, we do not have that many drones, and they are not that sophisticated. Thanks to James Cameron, though, one can easily imagine our future robot army. Perhaps we will use that army with the same forbearance and respect for human life that makes war a last resort now. Or maybe we will send our robot army all over the world, as ambassadors of our abiding belief that our lives are worth saving at any cost.