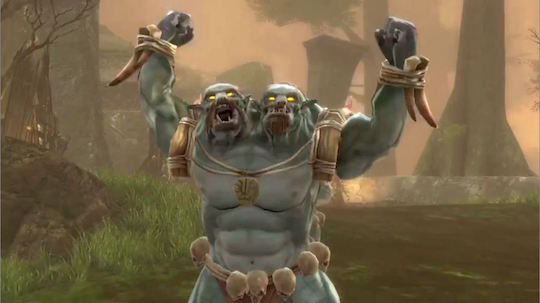 An Ettin, who is like to get upset whatever you call them

Last week, the Washington Post announced that it would begin using the pronoun “they” for people who identify as neither male nor female. The WaPo will also allow singular “they” to avoid gendering impersonal pronouns. Here’s Bill Walsh:

It is usually possible, and preferable, to recast sentences as plural to avoid both the sexist and antiquated universal default to male pronouns and the awkward use of he or she, him or her and the like: “All students must complete their homework,” not “Each student must complete his or her homework.” When such a rewrite is impossible or hopelessly awkward, however, what is known as “the singular they” is permissible.

Unlike Spanish, English does not have a singular impersonal pronoun. The APA recommends writing around this deficiency in the language, just as Walsh does. Props to Miracle Mike Sebba for the link. The combination of these two guidelines—call a person “they” if they want you to, but rewrite a sentence to avoid singular “they” if you can—suggests an odd but commendable system of values. Guideline number two insists the singular “they” is not correct. We’re willing to fudge it, says guideline number one, but not for your stupid sentence—only for people.

You can see this principle at work in the APA recommendations for what to do when a singular construction requires a gender-nonspecific pronoun, many of which boil down to “maybe you don’t need that kind of pronoun?” Behold:

APA recommends several alternatives to the general singular they, including the following:

Agreed that “his or her” is a bummer. It sacrifices that nimbleness which sent us looking for a pronoun in the first place. “Each student must complete his or her homework” sucks metrically, and it throws us into a particular bureaucratic realm where we remind the reader, right before the end, that despite their various genders and whatnot, we think of these kids as an undifferentiated mass.

I don’t think that difference is important enough to alienate half of readers every time we use “he” or “she” as an impersonal pronoun, and the WaPo and APA seem to agree with me. It is good to use singular “they” for one arbitrary person from a group of men and women, just as it is good to not keep referring to Steve as “he” after they explain to you that they no longer participate in gender binaries and regard themselves as neither male nor female.1 But I also agree with the APA and WaPo that the singular they is grammatically unsatisfying.

For this reason, I renew my call for the Spanish “se” to enter the English language as our gender-neutral impersonal pronoun. Plenty of Spanish words should probably enter the English language anyway, and they probably will, unless Donald Trump gets elected Great Leader of Earth’s Capital America in 2016. And “se” creates a nice balance with “he” and “she.” The only drawback is that no one will do this and I am crazy. But maybe, in the future, every student will have to do sis homework.