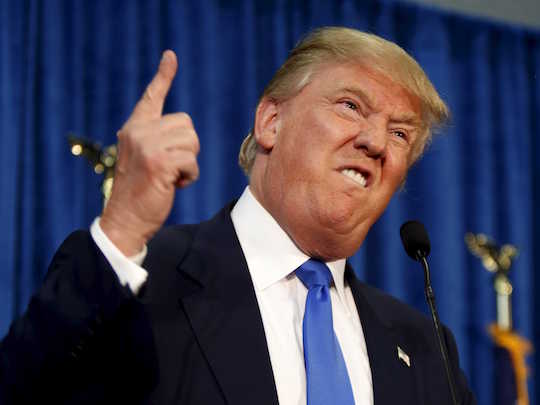 Character in a journalism student’s fantasy Donald Trump made headlines yesterday, because he said the United States should close its borders to Muslims. At press time, he keeps saying it. Finally, someone has the guts to tell it like it is. America has gone without a strong, loud, stupid leader for too long, and it’s also been too long since we made laws about kinds of people. Every time we made a law about a kind of people in this country—Indian removal, Jim Crow, Japanese internment—was a time Trump voters consider better than now. Yes, even Japanese internment. “What I’m doing is no different from FDR,” Trump told Good Morning America, referring to the worst thing FDR ever did.1 I know we recently said Trump had gone full racist, but now that he’s accused a domestic religious minority of conspiring with foreign enemies to obstruct his plan to make America great again, he has technically gone full Hitler. Unless, of course, he doesn’t really mean it.

I don’t know about you, but that’s the world I prefer. If Trump merely heard himself saying we should bar Muslims from the United States and then leapt to his own defense, as he is prone to do, then US politics has not produced a genuinely fascist candidate. If he means this stuff, though we must acknowledge that the leading candidate for the Republican nomination is running on a platform of militaristic religious nationalism. Historically, that’s bad.

But if he’s just sayin’ stuff, though! Then all we need to accept is that DJ Trump, clown virus of the Republican Party, will in fact say anything. We knew that already. Nothing he says matters, because he knows he’ll never be president and therefore won’t have to actually do anything. It’s harmless, or it’s harmful but in a decline-of-dicourse way, not in the way where we round people up and put them in camps. Fact: Trump said this unprecedentedly shocking thing the moment Ted Cruz pulled ahead of him in Iowa.

That’s what the devil does: he sends a mere asshole first, to make himself look good. Anyway, if Trump is talking about banning Muslims to win back the shit-eating wildman vote from Cruz—a strategy that worked on Ben Carson—then we can go to sleep knowing our culture only produces ridiculous narcissists, not popular Nazis.

Now is a good time to remember that registered Republicans make up 16% of the population, and about a quarter of them support Trump. Those are not chancellor numbers. But somebody’s got to be president, and it might be a Republican. Trump has been the number-one Republican since he entered the race. Yesterday, he announced his support for some kind of plan to keep members of one religion out of the United States. If he meant it, every one of us should do something right now to stop him.

Maybe that means mailing Hillary fifty bucks. Probably, it’ll be more effective to mail fifty bucks to Marco Rubio.2 Maybe write a letter to the editor, or talk to five people every day about why it’s important to vote for someone who can think. But this is the dream you had in high school: a hateful demagogue is rising to power, and you and your friends have to stop him. This is history now. We should decide, immediately, whether it is real.