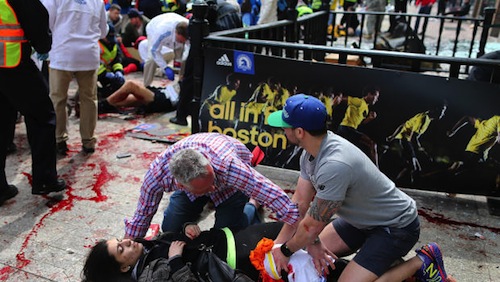 My first thought when I woke up this morning was that I would find out who bombed the Boston Marathon, and maybe why. As of this writing, no explanation is available. From a practical standpoint, that should not bother me so much; it pales in comparison to knowing that, say, an eight year-old boy was among those killed, or that several people who had just finished running 26 miles suddenly had their legs blown off. That is catastrophe, right there. It is disaster, in the same sense as a tornado or an earthquake, which also happened yesterday. The difference is that in nature, a bunch of screws and BB’s and nitrates do not spontaneously fly together and make a bomb. Somebody had to do that, and I would like to know who it was so that this disaster can become a tragedy.

I do not think I’m alone in that. According to CBS News, the FBI is questioning a Saudi national whom they are not calling a suspect. “He was seen running from the explosion,” the AP writes, “and a civilian chased him down and tackled him.” A lot of people ran from that explosion. An unidentified man tackled one that looked Arab, because that is a narrative of arbitrary, murderous explosions that we understand.

The President, too, called the explosions an act of terrorism. Few would argue with him, but applying the label doesn’t do much to assemble the kind of narrative I want. Terrorism is committed by terrorists. They claim responsibility; they have demands that we can meet or—more likely—not meet, so that their acts of terror become our acts of defiance. It’s the difference between paying $200 for health insurance and having $200 fall out of your wallet. In both cases your condition is the same and the money is gone, but at least in the former you understand where it went.

We do not understand where anything went yesterday. Presumably, any explanation would be disheartening—a new terrorist group, a new expression of some old terrorist group’s capacity to act in the United States, some awful loner. Any one of these, though, would be better than the miasma of all of them that is no explanation at all.

If you doubt that an unhappy explanation is better than nothing, consider how quickly Jordanian Salafists embraced the idea that what happened in Boston was fit punishment for the occupation of Iraq, or Westboro Baptist Church’s ostensible joy that God had sent the bombs as revenge for gay marriage. Those Westboro people are not really happy. Their lives are organized around the belief that the all-powerful force in the universe is murderously angry at everyone. They have a narrative, though, and it is one they can understand.

The rest of us are left with the feeling that people we have never met want to kill us, not because of who we are specifically, but because we are alive. Until we know better, somebody wanted to kill marathon runners in Boston the way a vandal wants to write his name on stuff. It’s not because he hates walls. It’s not because he is pursuing some larger plan. He is simply compelled, and what- and whomever he encounters is a means to enact himself.

If we knew who he was, we could say “that man is an asshole” and understand the whole thing in terms of criminal justice, as we have done with so many murderers before. If we knew that yesterday’s bomber was an organization, we could say “those people are our enemies” and understand it all as politics, another hard moment in our good fight. Even insanity, that awful triumph of nature over humanity, would be better than no explanation at all.

But we are stuck with the unsatisfying idea that, as The Onion put it, this is what the world is like now. It is as if there were suddenly a new way to suffocate or fall from a height or get sick; sometimes, for no reason and according to no predictable pattern, objects explode and you die. Somewhere, maybe in Boston and maybe on the other side of the planet, is a person who deliberately added this feature to our world. It might as well be god or physics or currents in the wind, for all we know. What happened yesterday was senseless. It cannot ever be satisfyingly explained. I would take an unsatisfying explanation, though, or a depressing one, over this general feeling that now more disasters happen for no reason at all.