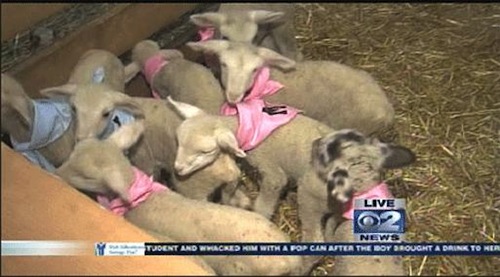 Lambs forced into the homosexual agenda at a cruel farm

Earlier this month, the fifth of five Butterball employees pled guilty to criminal animal cruelty, in the culmination of a two-year investigation that began with the activist group Mercy For Animals covertly taping mistreatment at a North Carolina turkey farm. A Department of Agriculture veterinarian, Sarah Mason, was convicted of obstruction of justice for tipping off a friend at the Butterball farm just before they were raided. On the same day the last Butterball employee pled, North Carolina state senators introduced the Commerce Protection Act, a bill making it illegal to videotape farm conditions that is modeled on ALEC’s Animal and Ecological Terrorism Act.

You might remember ALEC from last year, when a Florida legislator submitted an ALEC bill from which she forgot to remove the lobbying group’s mission statement. ALEC is a trade and interest group that writes model bills for state legislatures. They have responded to a recent spate of animal cruelty convictions at commercial farms with an even more recent spate of state laws that ban photography at places of employment, require job interviewees to disclose connections to animal rights groups, and place violators on a “terrorist registry.”

Obviously, people who videotape farm cruelty and turn the evidence over to the Department of Agriculture are terrorists. Any demand for enforcement of state and federal law is terrorism when it is A) politically motivated and B) damaging to business. The phrase “politically motivated” is an Optional Language Insert in the summary portion of the ALEC model bill, and it’s what shifts the discussion from whistle-blowers to terrorists.

The difference between a terrorist and a person whom Butterball simply does not like is that the terrorist, under normal circumstances, does not act to help the government enforce law. Two of the three animal rights-group investigations mentioned in the Times article end with said groups turning over their video evidence to federal and state authorities. The third created enormous bad publicity for one of the country’s largest egg suppliers, but the “terrorists” responsible did so merely by publicizing a video.

A reasonable person might distinguish between the kind of terrorism where you give information to law enforcement and the general public and the kind of terrorism where you explode a bus. Some might even call the first kind “journalism.” ALEC’s model Animal and Ecological Terrorism Act sits at the confluence of two of the most unfortunate trends of our time: the tendency to call everything terrorism and the practice of letting corporations write their own laws.

The second is pretty much ALEC’s fundamental mission. As a consortium of large corporations, it writes draft bills that individual representatives introduce to their state legislatures. The centralization of this process is manifest in the “dozen or so” states that introduced so-called ag gag bills in the last two years, and its directness is evident in the bills’ similarity. For whatever reason, a number of legislators like Florida’s Rachel Burgin are willing to submit ALEC bills to their legislatures verbatim.

That’s how animal rights groups opposed to commercial farming become terrorists. Regardless of whether you agree with PETA, intellectual honesty demands that you class them in a different category from Al Qaeda. The willingness to call any politically motivated act an act of terror is a dangerous subversion of how American democracy is supposed to work. This country’s political process is not circumscribed in the act of voting. To make everyone sad with videos of farmers kicking turkeys is not an act of terror.

Those videos are real, after all, and Mercy For Animals didn’t even do the illegal part. They just told people about it. ALEC’s bills making it terrorism to gather evidence of a crime is what you get when corporations are allowed to literally write laws. It’s what you get when terrorism is defined as anything you do for ideas instead of money. It’s the difference between government by the people and corporatocracy.

I do not see much difference between what Mercy For Animals did and what, say, James O’Keefe does, except that Mercy For Animals seems more honest. The main difference is that ACORN is not part of an enormous corporate lobbying group for which elected officials across the country act as proxies. You can let businesses take over the function of government—they’re happy to do it. Don’t be surprised, though, when the people who thwart business are suddenly on a list of government’s enemies, and what costs somebody money becomes an act of terrorism.