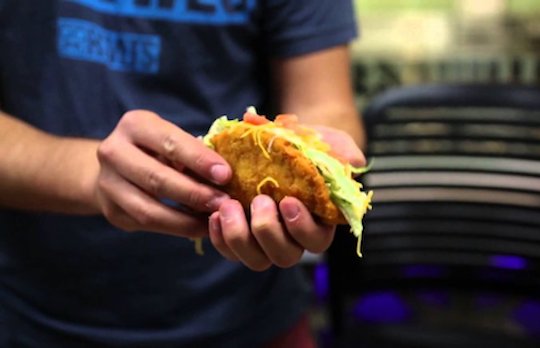 In response to demand for not just more food but more foods, Taco Bell has invented the Naked Chicken Chalupa, a taco whose shell is made of fried chicken. It’s a genius idea, when you think about it quickly. “The shell is the chicken,” the press release explains. “The chicken is the shell.” To wit:

Taco Bell is coming un-shelled with its latest food innovation, coming in the form of the first taco shell made entirely of marinated, all-white crispy chicken. The Naked Chicken Chalupa will bare all nationwide on January 26, clucking the trend of traditional fried chicken.

“Be sure to get the word ‘coming’ in there twice,” said the scientist who invented moldable chicken extrusion, after he was promoted to CEO of Taco Bell. Also, “clucking the trend” is a pun; it plays on the phrase “fucking the trend of traditional fried chicken.” Anyway, here are some circumstances under which I would eat a Naked Chicken Chalupa.