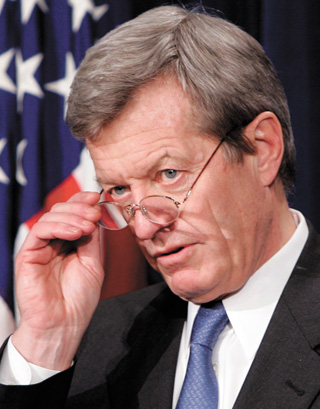 Grassley is most likely in his last term as a senator, and chances are he’s the GOP’s designated hitter when it comes to opposing any sort of reform proposal, via rumormongering or whatever. So far, he’s doing a terrific job. While the Baucus proposal includes many items from the Democratic health care reform wish list—expansion of Medicaid, caps on out-of-pocket expenses and restrictions on denial of coverage for pre-existing conditions—it conspicuously lacks a public option. Instead, it provides for the creation of non-profit insurance cooperatives, the dry hump of government-backed health insurance reform. Whether such cooperatives would actually work better than previous attempts to improve entrenched industries via the same model, or how they would be preferable to a public option in any area besides political expediency, remains to be explained. Baucus himself seems to believe that any bill containing the public option simply cannot pass.

What the Baucus bill does contain is a provision requiring almost all Americans to purchase some kind of health insurance by 2013, or face a penalty of up to $3,800 a year. On a systemic level, such a measure makes sense; it will substantially reduce the cost inflicted on health care providers (and, indirectly, taxpayers) by the millions of uninsured Americans who currently treat their broken arm by checking into the emergency room and then skipping out on the bill. It’s also a boon for insurance providers, who would find themselves in the enviable position of selling a product that all U.S. citizens are legally required to buy. President Obama endorses this policy, and has compared it to state laws requiring all drivers to carry auto insurance. It’s an apt comparison, except that I can choose not to own a car. Under the Baucus plan, if I’m one of the thirty million Americans who are currently going without health insurance—not, presumably, because I hate going to the doctor but because I can’t afford it—I’m not so lucky.

“But wait!” Baucus and others say. “Insurance is going to get a lot cheaper, because health insurance exchanges will let the uninsured negotiate en-masse for cheaper plans.”* It’s true that part of the reason individually-purchased health insurance is so much more expensive than employer group plans is that employers can buy in bulk. When Aetna negotiates a premium with Ivy Consulting Group, they’ve got an incentive to dicker a deal because they’re not just getting my business; they’re getting seven other people in the package. Imagine that kind of negotiating power not with seven people, but with 30 million!

Now imagine that kind of negotiating power when, under federal law, if any of those 30 million people walks away from the table, he has to pay $3,800 and get nothing. I’m no economist, but I suspect that the cheapest insurance plan created by that market is going to cost around $3,799. Just for fun, let’s look at my most inexpensive health insurance option under present conditions. The good people at Assurant Health have offered me an insurance plan with a $3,500 annual deductible and a 20% coinsurance payment (no dental, no vision, no maternity, presumably no abortions for Mexicans) all for the princely sum of $107.39 a month. Bear in mind, I’m a 32 year-old nonsmoking male who runs four miles every morning, so I qualify for the Preferred Rate. If I had high cholesterol or blood pressure over 141/91 or somehow managed to turn 40, I’d be out of luck. Let’s say I buy this Assurant plan, pay my premiums for a year and then dislocate my shoulder, tearing off my labrum—an injury I managed to sustain a couple years ago. Arthroscopic surgery in 2007 cost me $3,600. Since I’ve saved money on my premiums by agreeing to such a high deductible, I’m responsible for the first $3,500, plus 20% of the remaining c-note. I’ve been dutifully sending the Assurant boys a check every month, so my total expenditure in this scenario comes to $4,788.68. Paying almost $1,300 worth of premiums saved me 80 bucks.

Of course, under the Baucus plan, it would have saved me $3,880. And make no mistake: the people who buy health insurance solely to avoid paying a fine are going to purchase low-premium, high-deductible plans. Those of them who need chemotherapy or wind up in traction are going to save a bunch of money, but those of us who just want to get our teeth cleaned and protect ourselves from sports injuries will be no better off. Requiring Americans to buy coverage without giving us a public option is a gift to the health insurance industry, plain and simple. It “fixes” a corrupt system by forcing us all to participate in it, and offers as a safety measure a promise of free-market competition completely undercut by a law that increases demand to 100%.

The only advantage of the Baucus bill is that it’s more likely to get passed. Democrats will get to say they pushed through meaningful reform and the President will be insulated from pathological liars who tell eighty year-olds that he’s a socialist. Those of us who don’t qualify for Medicaid and don’t have millionaire parents will have to make the same choice we’ve always made: work in an office or don’t get sick. Now that the second option is going to cost me $3,800, I suppose I’ll be happier forking over thirteen hundred bucks to get nothing. I won’t have better insurance, though. The $3 trillion health care industry will be 30 million times $1,300 bigger, and Max Baucus will be Senator For Life. He’ll be able to keep buying into that sweet Congressional health insurance plan, which works great for 535 people but is somehow unacceptable for 300 million.

* As far as I know, Baucus and others have not actually said this, so the use of quotation marks here is somewhat irresponsible. Internet!