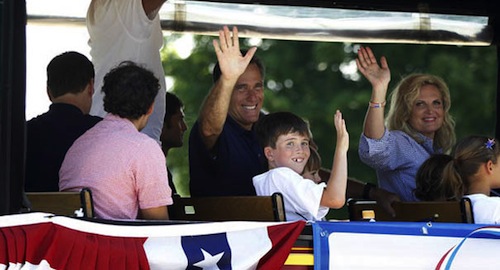 “We removed it to make his mouth more efficient!”

My favorite aspect of the 2012 presidential election is the micro-genre of news story in which Mitt Romney does some Richie Rich shit. This weekend was delightful, as Romney held a trio of fundraisers in the Hamptons. You may remember the Hamptons from such experiences as client invites you to his summer home to reinforce the idea that he is your boss, or this. That was hilarious when I was twelve, but now that I am older I prefer the sort of sardony you can only get from the New York Times:

A woman in a blue chiffon dress poked her head out of a black Range Rover here on Sunday afternoon and yelled to an aide to Mitt Romney, “Is there a V.I.P. entrance. We are V.I.P.” No such entrance existed.

Well played, Michael Barbaro and Sarah Wheaton. But for the prize pig Romney donor quote of the weekend, you’ll have to click on the jump.

At the Atlantic via the LA Times, anagram bait Garance Franke-Ruta quotes another anonymous Romney donor who complains that “the common person” doesn’t understand “why Obama is hurting them”:

If you want to project an image of droll plutocracy but forgot your monocle, try using the phrase “everybody who’s got the right to vote” instead of “voters.” It implies that you regard enfranchisement of the nails ladies as a recent experiment. Mrs. Vanderbilt’s claim that ordinary people don’t understand how things work is perfect, since that is the essence of any Rich Romney story.

When the Republican nominee notes that his wife drives “a couple of Cadillacs” or attempts to speak the language of black kids, the dissociation is exhilarating. For a moment, we feel so alienated from Romney that we wonder if we are not the weirdos. In that second, we experience what it must be like to be Mitt Romney—watching other people make jarring and incomprehensible cultural references, listening to them talk about household finances using numbers that we encounter only in the sciences. Then we see footage of him getting into his rocket train or whatever, and we’re like oh yeah. The emotional progression makes a perfect narrative of Us versus Them.

It also creates a tricky dynamic, since it’s not Us versus Mitt Romney; it’s Barack Obama versus Mitt Romney. Barack Obama is not Us. He is the president, and his life is just as rarefied as Romney’s, if not more so. Several people have been quick to point out that Obama holds luxuriant fundraisers, too, particularly in Hollywood. The president is snuggled up in bed with rich people just as lovingly as his opponent, except for two differences:

1) So-called small donors—those who gave $250 or less—have contributed just over 50% of Obama’s total fundraising thus far, as compared to 9% of Romney’s haul.

2) George Clooney has had a job.

Obviously, one of these differences is real and one is bullshit. Hollywood celebrities are just as narcissistic and oblivious as other rich people, if not more so. But they are also more likely to have worked at Applebee’s. I submit that, on a level possibly beneath reason, Hollywood actor is to rich Hamptons person as Barack Obama is to Mitt Romney. Both live with extraordinary privilege that renders the lives of most Americans conceptual at best. Neither feels the brunt of the economic downturn they keep talking about. But actor/Obama at least remembers what it was like to try to time rent check against paycheck, whereas Hamptonite/Romney probably grew up as somebody’s son.

That is the irrational calculus my brain undertakes in the split second when I see Romney getting into a black Suburban. The same association is missing when I see Clooney get out of same. Probably it is a misconception, a fallacy not unrelated to Clooney’s/Obama’s superior acting ability. George Clooney has singers and anchormen in his family, just as Romney has a governor in his. The difference is that Clooney cut tobacco before his career took off, whereas Romney’s very first job was as a management consultant.

Oh, right—there’s one other difference, too. One of these weird rich men with successful relatives advocates higher taxes on his fellow rich men to pay for aid to the poor. The other is running a two-issue campaign: cut taxes and repeal health care reform. Both are probably creepy aliens, but at least one of these creepy aliens wants to help me. The other can’t believe that I still don’t get it.