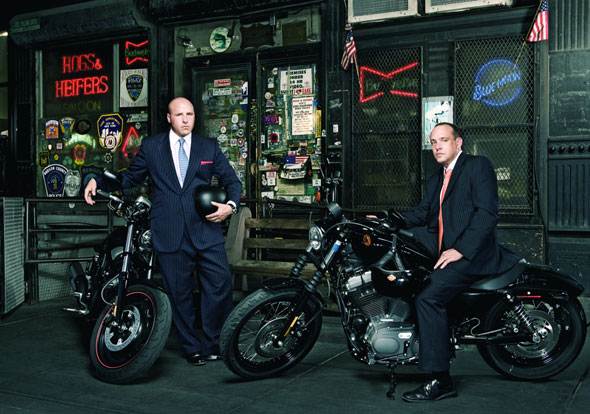 The actual outlaw biker was certainly real at one time. If you haven’t read Hell’s Angels, the rad book-length study of nomadic biker gangs by Hunter S. Thompson, you should. Featuring guys with names like Cheerful Chester the Child Molester, it describes a subculture of gangs that subsisted on drug trafficking, prostitution and occasional attempts at opening legitimate repair shops, which usually end in structure fires. The Hell’s Angels, Gypsy Jokers and other California groups were real biker gangs that really did live nowhere and beat people up for sport, and they sucked. They were also an object of fascination for rock and roll, which had recently discovered that the iconography of criminals was a great way to sell songs about having sex to college students. The Sixties’ love affair with bikers culminated in the Rolling Stones concert at Altamont, on Decmber 6th, 1969. At the suggestion of the Grateful Dead,* the Stones hired the Hell’s Angels to work security, and the Angels kept the stage secure by stabbing a guy and then stomping him to death. The Hell’s Angels demonstrated that they were extremely cool even compared to the Rolling Stones, but it was the kind of cool that is maybe not the basis of a postindustrial society.

In spite of/because of the stigma attached to the Hell’s Angels, riding a motorcycle lives on in the popular imagination as proof that a person is Not Like Everybody Else. Like most contemporary rejections of mainstream culture, the outlaw biker is an icon of mainstream culture. If you’re wondering whether bikers are still pariahs, you obviously don’t read Meghan McCain. Me-Mac’s most recent column in The Daily Beast—which bears the middle-school-English-essay title, “Why I Love Bikers”—celebrates the role of bikers in her father’s 2008 Presidential campaign. A biker group called Rolling Thunder, which rides to raise public awareness of POW-MIA soldiers, joined her father’s “No Surrender” tour before the primaries. “There is something about bikers and biker rallies,” Meghan writes, “that makes me feel particularly patriotic and—dare I say it?—Republican.”

Republican, indeed. Megahn McCain would say the sun was Republican if it shone on her dad’s campaign bus,** but she may be on to something here. According to the Motorcycle Industry Council, in 2007 the median income of a Harley-Davidson buyer was $84,700 a year, nearly 60% higher than the national median. The average rider was a sprightly 48 years old, which made him half the age of McCain but considerably older than the outlaw biker of popular imagination. It would appear that the Harley is not so much a visible rejection of society as it as a sign that you can afford a third motor vehicle. It seems like a blue-collar, mavericky thing to do, though. In that sense, I guess it is particularly Republican.

“Had Hollister not happened, had Life magazine not written their article, had Hollywood not glorified it, I don’t know if we would be here today,” says Tom Bolfert, head of archives for Harley-Davidson. Let us not forget that Harley-Davidson and other motorcycle manufactures are businesses. Like a lot of our treasured icons of American counterculture, the biker is primarily defined by a product he bought. He joins the rock ‘n roll connoisseur and the VW-dwelling hippie in the pantheon of rebel consumers. That biker cool can be grafted to the Republican nominee for President as easily as to the Rolling Stones suggests that it is—like the bike it requires—a commodity. Like any commodity, we can buy it, but only at the price of having it sold to us, too.

* Dude, do not do things at the suggestion of the Grateful Dead.