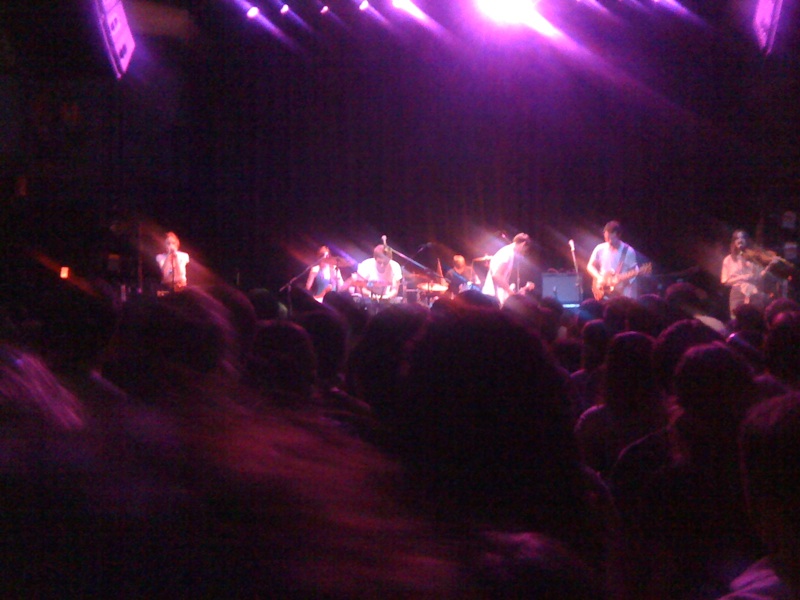 The camera phone was actually the only thing not moving.

The Cure and I are crappy old people, so we arrived at the 9:30 Club in a cab, which dropped us at the curb next to a cluster of sad, hopeful-looking girls in pre-owned dresses. They watched the entry line in wan silence, crossing and re-crossing their arms and generally looking like recently fired librarians. A man with a clipboard came out to talk to them, apologized, and went back inside. A few minutes later they marched in, with an air of profound determination.

“Were those Los Campesinos! groupies?” I said.

In fact they were Los Campesinos! members, and they proceeded to rock the living shit out of all of us for the next hour, despite looking like every girl I ever made a mix tape for in college. I say “despite,” but I probably mean “because of.” There are seven people in Los Campesinos!—a subject that ill-prepared interviewers seem to find fascinating—and last night at the 9:30 Club they were distinguishable from the crowd primarily by being A) less ostentatiously dressed and B) younger. Otherwise, these are the same guys who were in your band in high school. Except they are much, much better at writing songs:

“And We Exhale And Roll Our Eyes In Unison” by Los Campesinos!

“In unison” describes a lot of Los Campesinos!—the sing-along refrains, the somehow tight stage performance, the similarity between the audience and the band. It all creates an eerie sense of purpose, as if Los Campesinos! were a symptom of some broader movement, so that when Gareth Campesino! is a dick to some reporter it feels important. Los Campesinos! are not fucking around. They released their first LP in 2008 and another full-length album six months later. A third has been announced for before the end of 2009. When asked about their hyperkinetic output, Gareth often points out that the band will probably break up eventually, so they should record while they can.

It’s funny because it’s true. There is something almost comically volatile about a band with seven people in it, and the three girls/four boys arrangement guarantees that something hurtful will happen just about every time someone gets drunk. The most recent Los Campesinos! album was titled We Are Beautiful, We Are Doomed. A disproportionately high number of their songs are about knowing one’s behavior is unsustainable, and their cacophonous live show is a gleeful chorus of the probably damned.  The fragility of it all is underscored by Aleks, their keyboardist, who is so visibly anorexic that her presence onstage becomes a sort of omen. (Aleks, if you are somehow reading this: you and I have an emotional relationship that exists solely in my mind. Let’s go eat something.) There is a sense of inevitable loss animating Los Campesinos!, but it’s not nihilism. It’s youth.

Nowhere last night was the evanescence of youth more obvious than in the 31 year-old man pounding beers and yelling along to “You! Me! Dancing!” from the back row. When I was the age Los Campesinos! are now, I cared about punk rock and punk rock only.* Punk seemed not fake.** Going to punk shows made me feel like I was participating in something immediate and short-lived. The bands were never going to be popular and the clubs were constantly on the verge of going broke, and even then I knew that I would eventually get too old. It was a bright world burning out, and in that way it resembled, you know, life. Punk rock is how young people first come to understand death, which at that age seems violent and beautiful. As I get older and the possibility of death by slam dance becomes more remote, I get the nagging sense that I have lost some crucial element of vitality. I need punk less and feel its absence more. The big unkept secret of punk rock is that it’s a bunch of kids who reject society in order to be part of a community. I don’t miss the violence, but I miss the sing-along choruses. Last night Los Campesinos! returned them to me in abundance, and you should listen to their records and go to their shows while you can. As long as Los Campesinos! is still together, nobody dies alone.

* Okay, ska too, but how cool does that sound?

** Which seems odd in retrospect, given the haircuts.