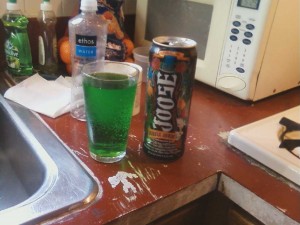 Joose, wisely sold in an opaque can. Compare color with the dish soap in the background.

As of yesterday afternoon, “Oh my god, it’s so green,” joins “one small step for man” and “O brave new world” among the awestruck utterances of the great explorers. If you’ll remember, Combat! blog recently made much of Joose, the alcoholic energy beverage/sad substitute for Sparks that promises to make you have a really good, flame-decaled time. Loyal Combatants and astronauts of human consciousness Ben and Parliament drank Joose yesterday. Presumably it turned their teeth to diamonds and money sprayed out of their pockets immediately. We don’t know, because our only contact with their bold fresh reality was through cellular telegram message. Mildly edited transcript follows:

BEN: Parliament and I are smoking a bowl reading La Recherche du Temps Perdu and about to split a JOOSE.

DAN: My blog was not intended to promote the consumption of Joose. Make sure to wave your money around and point at it.

BEN: I can’t it’s so bad. Like seriously. Dan. SO bad. I might rather drink urine. Seriously. So bad.

DAN: The ads make it sound like it tastes all fruity. Is it worse than Sparks?

DAN: Ick. It’s worth it to get all Joosened up, though, right?

What happened to them? Did they come unstuck in time, joosing connection with our four-dimensional reality to wander one of the curled dimensions suggested by strang theory? Or did they watch Super Troopers? We just don’t know. One thing is certain, though: they are brave, brave men, and probably dead now. Good night, sweet princes. I would bid you sleep sweetly, were you not so jacked up on taurine as to make that impossible. Instead I will joost say that I hope wherever you are, you are having fun and not ackin the fool. May a flight of Eminems sing thee to thy rest.