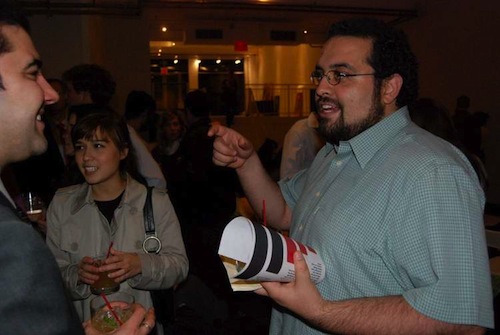 “Well-known” does not influence photo quality when attached to “sociology professor.”

Shamus Khan’s opinion piece about “The New Elitists” initially made me angry. Sure, I enjoyed the sweet anecdote about William Vanderbilt getting snubbed by the New York Academy of Music, and I’m always up for a screed against the rich. The rich are given resources out of all proportion to their talent and usefulness, usually by their parents. It’s a peculiar way to run a country that defined itself against inherited aristocracy, although it makes more sense if you think of the United States as the country that defined itself against Marxism. My complaint is that Khan focuses his column on cultural elitism—the “omnivorousness” that passes for sophistication but is often simply the hallmark of privilege. I consider myself a cultural omnivore. I like Sean Paul’s art and Jean Paul Sartre. Must I therefore be an elite?

First of all: yeah, I totally am. By the standards of much of the United States, I live a life of extraordinary privilege. Granted, I went to the University of Iowa and drive a ten year-old truck with body damage, but I have also never worried about getting shot and grew up with parental models who considered reading more important than meth. I am middle class, and the life of the middle class is almost insanely better than that of the lower class. We have Bon Iver and books and a lot of options for fun eyewear.

In other words, we can express our personalities through consumer choices. Some of them are more noble than others—Sartre v. Hegel as opposed to iPhone v. Droid—but they are choices of consumption nonetheless. The poor are defined by their inability to consume, just as the rich are defined by their power to consume the shit out of everything. Yet liking jazz or Gabriel Garcia Marquez is considered more than a material characteristic; in some ways such tastes are regarded as anti-materialistic, bohemian. Because my iTunes library contains A$AP Rocky, Gillian Welch and Nusrat Fateh Ali-Khan, casual judgment holds me superior to someone who only listens to Dizturbed.

It so happens that the Dizturbed guy is also way more likely to live in a trailer. This tacit certainty is the core of Shamus Khan’s argument: where the material elite of American society once defined themselves by cultural exclusivity, they now practice a voracious cultural inclusion. They cultivate their gardens, as Henry James said. That they are among the select few who can afford gardens is the unspoken truth that allows the elite to substitute cultural sophistication for material advantage, and righteousness for wealth.

What is called good taste is in fact moneyed taste, in other words. Khan is by no means the first sociologist to observe this phenomenon, and I believe it is real and influential. Still, there is something unsatisfying about his claim that:

Elites today must recognize that they are very much like the Gilded Age elites of old. Paradoxically the very openness and capaciousness that they so warmly embrace — their omnivorousness — helps define them as culturally different from the rest. And they deploy that cultural difference to suggest that the inequality and immobility in our society is deserved rather than inherited.

Agreed that when someone starts talking to you about Grizzly Bear, you know he went to college. But I have a hard time seeing diversity of taste as only a cudgel with which the elites beat back the lower classes—surely, liking different things, things from outside one’s culture of origin, can also be a good in itself. The life of the mind is not merely an epiphenomenon of advantage. Even the half-assed version that is the life of consumer expression is only a secondary aspect of the real difference between rich and poor: having a lot more money.

In focusing on the cultural differences between the “elites” and ordinary Americans, Khan finds a novel angle that obscures his target. You will be shocked to hear that he recently published a book. It appears to be an indictment of the heritability of privilege in 21st-century America—a subject that fascinates me. Also I have a birthday coming up. In conflating intellectual and cultural development with material wealth, however, he succumbs to the same bullshit notion of elitism that I consider a pox on contemporary discourse.

The problem with rich people in America is not that people who read Proust are dicks to people who like Toby Keith. The problem with rich people in America is that they have been given a larger and larger share of our national resources, often for no greater achievement than being born. That’s how you wind up putting unqualified people in charge of a complex society, and that’s how a complex society becomes simple and ineffective. Money talks, and rich people often get to talk regardless of what stupid things they are saying. Whether their tastes are broad or narrow—and whether the moral value assigned to broadness and narrowness is justified—seems orthogonal to the discussion.